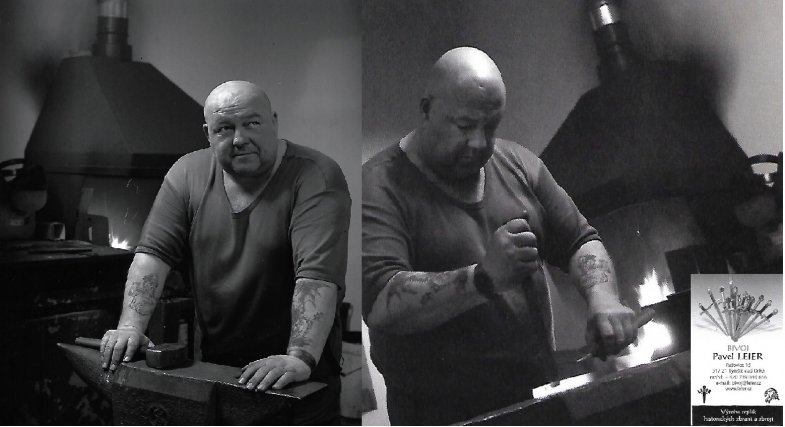 It is an honour for us to introduce Mr. Pavel Leier - a manufacturer of replicas of historical bladed weapons. He has been delivering to our internet store since 2004. He specializes in the manufacture of bladed weapons such as swords, daggers, falchions, axes, spears, etc.

Motto: A lot of work and sweat, but then music and peace in the soul.

Pavel Leier was born on May 22, 1965 and lives in the village of Rašovice near Týniště nad Orlicí, where he has a house with a workshop, pub and a farm. He learned an apprenticeship at the vocational school for locksmiths and has not given the metal out of his hand since. In 1992 he started his own business. He makes mainly swords and daggers, which are adapted to the needs of practical use (scenic fencing and re-enactment). But he is also able to produce a full-suit knight armor and various props for historical and scenic fencing.

His hobby as a member of a fencing group brought him to this handicraft. He had the honor to participate in the equipment production for some Czech and foreign historical films and fairy tales. Although his craft is a difficult physical job, he also needs a lot of patience and ingenuity (so typical of Czech craftsmen) in his work. But he is always happy with the result of his work and efforts. The joy is even greater when a customer comes back with a positive review.

Pavel Leier likes sirloin, is married and has six children in total. His hobby is observing nature and listening to it.