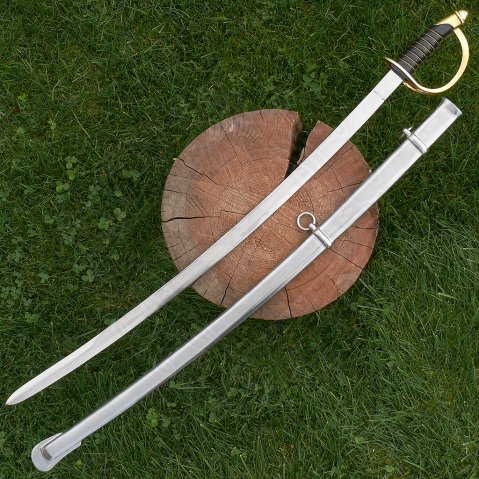 This ornate saber replica is patterned after the U.S. Model 1860 Cavalry saber issued prior to the Civil War, and which was used during that period and into the Plains Indians Wars of the 1870s and 1880s. It features a carbon steel blade and is very authentic in detail. Its wrapped handle fits the hand perfectly. The guard, basket and pommel are made of shiny brass. The U.S. Model 1860 Light Cavalry saber comes with a metal scabbard. The rings on it are for hanging it from a belt, but could be used to hang it from the wall.

This cavalry saber is the successor to the slightly heavier model in 1840. It was introduced in 1860 in the cavalry and soon found its bloody use in the civil war that burst out in 1861. The blade is made of quench carbon steel. It is provided with a groove to reduce its weight and enhance the overall balance of the weapon. Its finish is polished.

The blade is of fairly heavy and well made of carbon steel, polished metal sheath included.

Included in these categories: American Sabres