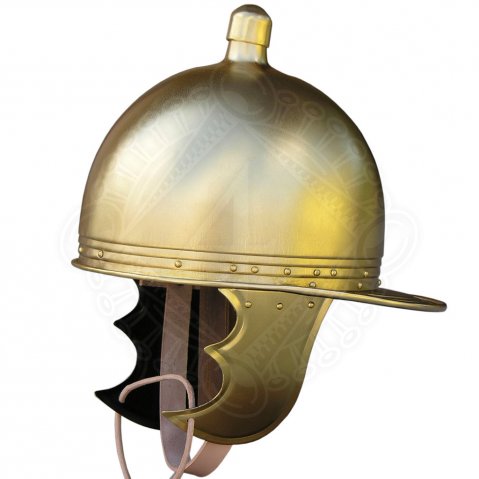 Montefortino, Roman helmet made of brass

Montefortino helmets are generally characterized by a conical or round shape with a raised central knob, and a protruding neck guard as well as cheek plates to protect the sides of the head. Other common features include a "rope"-type pattern around the edge, and "pinecone"-type patterning on the crest knob. Note that the classifications are those used by archaeologists, rather than Celts or Romans, who, if they did distinguish among these types, have left no known record of the terms they used.

In the Roman Republic, the Montefortino helmet was the first stage in the development of the galea, derived from Celtic helmet designs. Similar types are to be found in Spain, Gaul, and into northern Italy. Surviving examples are generally found missing their cheek guards (probably because they were made of a perishable material which has not survived, e.g., leather[1]) though a pair of holes on each side of the helmet from which these plates would have hung tend to be clearly identifiable, and examples which do include cheek guards show clearly how these holes were used. Roman versions sometimes contain inscriptions of the name of the soldier who wore the helmet. Earlier helmets in the type are generally more decorated since, as the Roman army moved into the huge period of growth during the Marian reforms at the end of the 2nd century BC, cheap, undecorated but effective helmets needed to be mass-produced for the mainly poor legionaries.

This helmet can be made to measure after your measurements ‘1a’ to ‘1j’ in this measurement chart.

Please read our instructions, how to determine a helmet size correctly.