Viking Sword with hilt of bronze 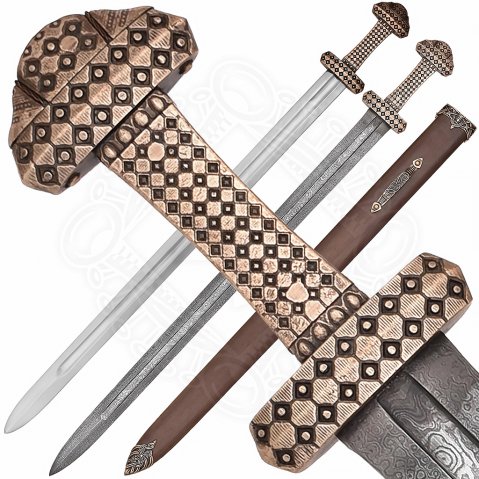 This Viking Age sword, which has the characteristic appearance of a Type D Viking sword according to Jan Petersen's typology De Norsk Vikingesverd (1919), is a replica of an archeological find from the Scottish Isle of Eigg - one of the Small Isles, in the Scottish Inner Hebrides.

Viking Sword with hilt of bronze

Viking Sword with hilt made of bronze

It features a blunt, double-edged blade (from high carbon od damask steel) with a wide fuller. The finely crafted hilt, guard and pommel are cast in bronze.

The sword's scabbard is made of leather-wrapped wood. Its chape, throat and belt loop are also made of bronze and richly adorned.

Specs may slightly vary from piece to piece.

Included in these categories: Viking swords