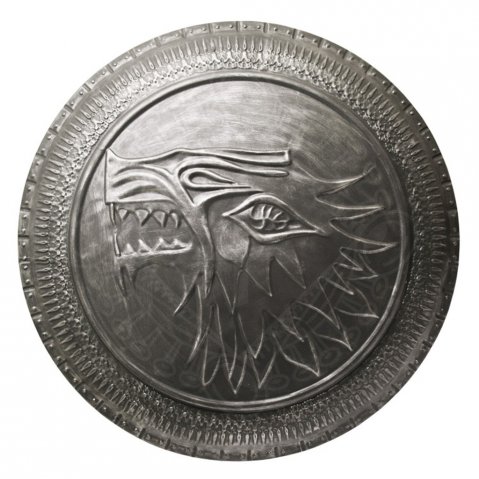 If you put down your email here, we will notify you as soon as the product Game Of Thrones - Stark Infantry Shield is in stock again.

House Stark of Winterfell is one of the oldest Great Houses of Westeros. The Starks reigned as Kings in the North until the Targaryen conquest and then served as Wardens of the North for nearly 300 years. Following the imprisonment of Lord Eddard (Ned) Stark, his eldest son and heir, Robb Stark, calls his banners and marches the Stark army south to free his father. When King Joffrey proves his cruelty and executes Ned, the North rebels against the Iron Throne and declares itself an independent kingdom once again, crowning Robb king in the North. The many victories of the Stark army during the War of the Five Kings are due in no small part to the everlasting loyalty of the Northern soldiers to the Stark family. Unfortunately, their rule in the North comes to an abrupt end at the infamous Red Wedding massacre, where King Robb, his pregnant wife, his mother and most of his soldiers are betrayed and slaughtered by the Freys and the Boltons, who have formed a secret alliance with House Lannister. Both the North and Winterfell fall for a time to House Bolton, but are eventually restored to their lawful lords after the Battle of the Bastards. Fought right outside Winterfell, this battle opposing Ramsay Bolton's army and the outnumbered Stark forces (now led by Ned Stark's illegitimate son Jon Snow and composed of men of the Free Folk and minor Northern houses) sees the unexpected defeat of the Boltons after the knights of the Vale's last-minute charge and rescue. Jon Snow is proclaimed new king in the North by his bannermen.

But winter is coming, and with the Knight King and his army of the dead threatening the world's very existence, the Stark army and its allies have still many battles to fight...

There is only one war that matters. The Great War. And it is here.

This replica of the Stark infantry shield is an officially licensed collectible meticulously recreated from the actual prop used on the HBO epic fantasy drama TV show Game of Thrones®. It has been crafted with close attention to detail and no effort was spared to accurately reproduce the authentic features found on the original piece. This round shield made of cold rolled steel with distressed Stark grey painted finish is embossed with the direwolf sigil of House Stark and fitted with leather straps on the back.

Each shield is individually serialized and comes with a certificate of authenticity. Delivery also includes a wooden wall mount with slots that will accommodate most swords and will allow you to display up to three of your favorite swords behind the shield (the swords pictured here are NOT included in delivery!).

Please note that this shield is intended solely for display purposes as a collector's item.

- Material: cold rolled steel with painted finish, leather straps on the back