Home ArticlesWeapons Guns with the smell of gunpowder

Guns with the smell of gunpowder 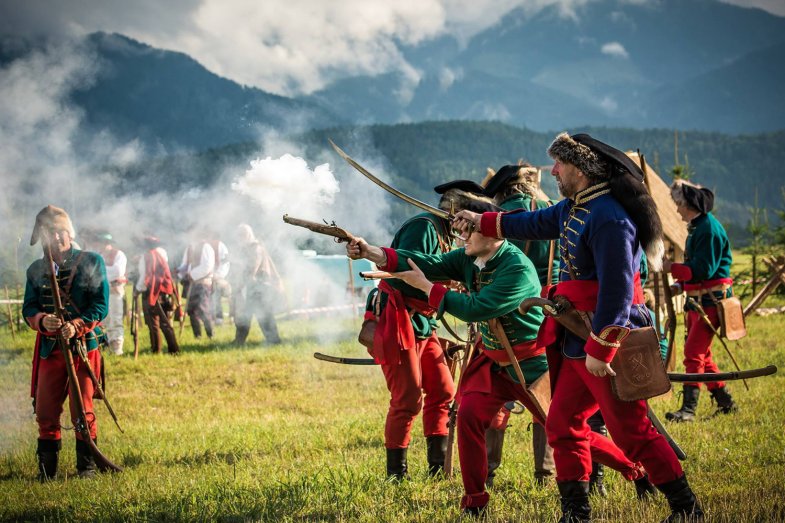 Pistols are handguns, or short-barreled firearms. The first pistols appeared at the turn of the 15th and 16th centuries. The origin of the word “pistol” is disputed; however, it may be derived from the Czech píšťala (pipe, whistle) or the French pistolet, or Italian pistolese. The Czech word píšťala referred to a type of hand-cannon used in the Hussite Wars.

In this article, we are going to have a look at the two types of historical pistols, most often seen in museums or battle re-enactments. It is noteworthy that the pistol was not only used by soldiers and sailors, but also by men in duels. Let’s dive deeper into the history of pistols... 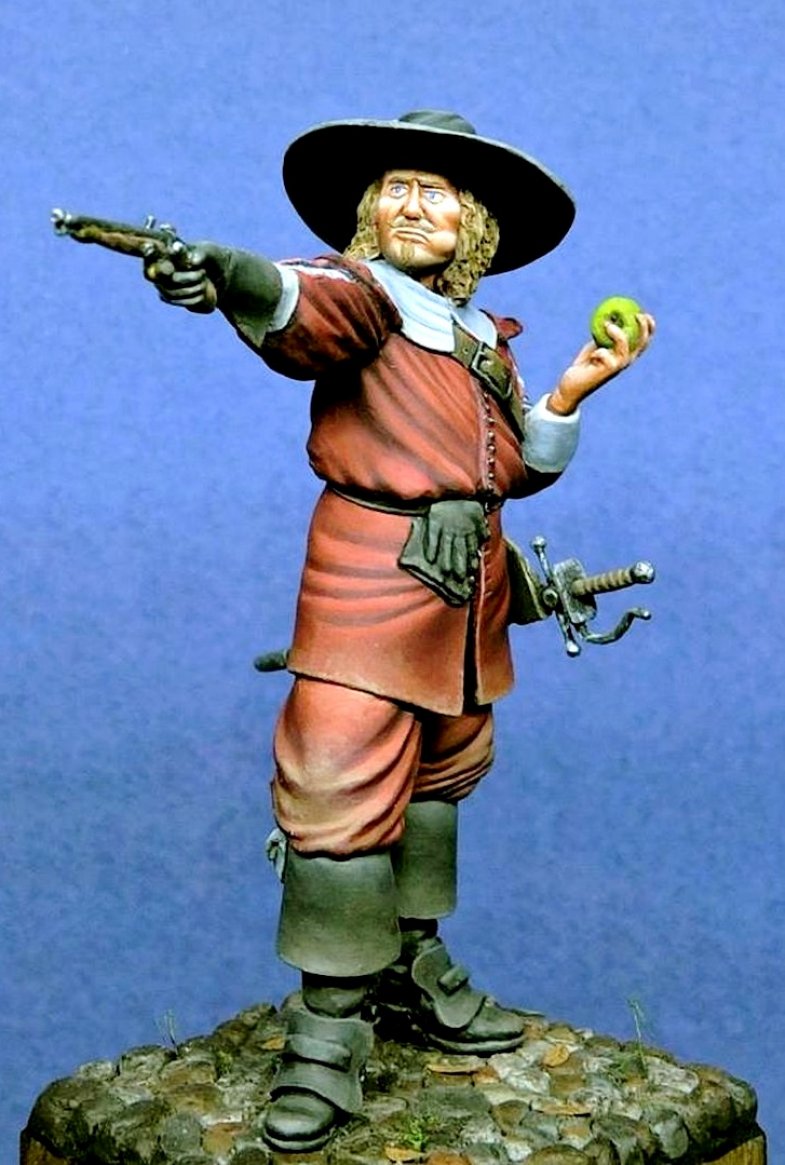 Until the end of the 19th century, pistols were loaded with black powder. Firing of the pistols gradually covered the battlefield with thick smoke, making it difficult to see and navigate through it. Until the second half of the 19th century, most pistols had to be loaded from the front of the barrel and could only fire a single shot. They operated on the basis of ignition mechanisms called ‘locks’. 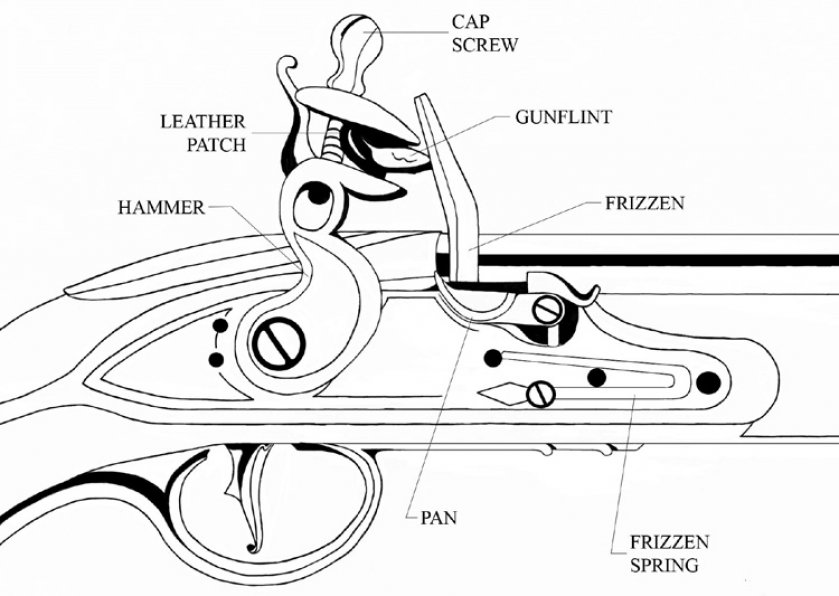 The Flintlock. When the flint strikes the frizzen, a spark is created. At the same time, the frizzen forms the upper part of the pan containing powder. When the spark falls into the pan, the powder is ignited and the gun fires.  Illustration by Chelsey D. Wilson.

Flintlock became popular and widespread in the second half of the 16th century.Probably the oldest version of the flintlock is the Spanish miquelet lock. Miquelet is a distinctive form of snaplock using the flint-against-steel ignition. 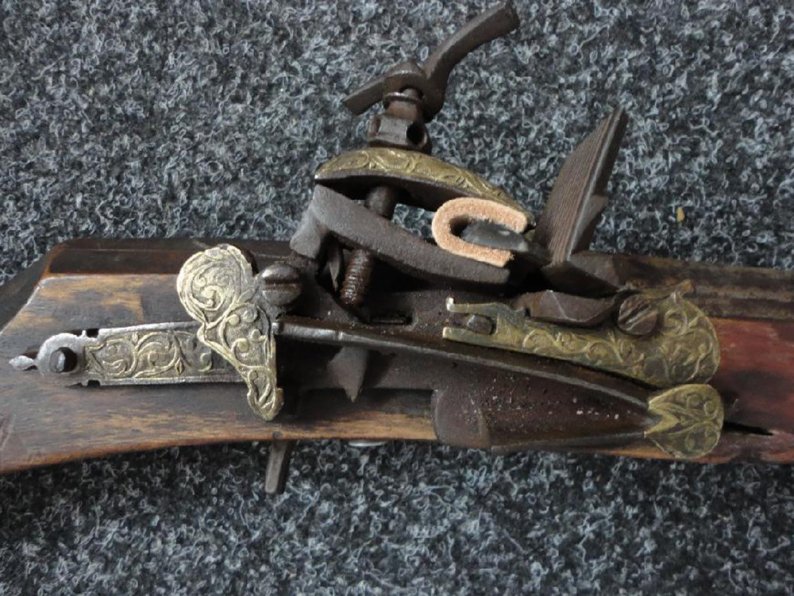 The Miquelet lock later evolved into the "Dutch" lock, and then into its later versions.

Gradual improvements to the original flintlock evolved into the French flint lock, which became the most successful and widespread version of flintlock. The French flintlock was used for military forearms and pistols until the second half of the 19th century. 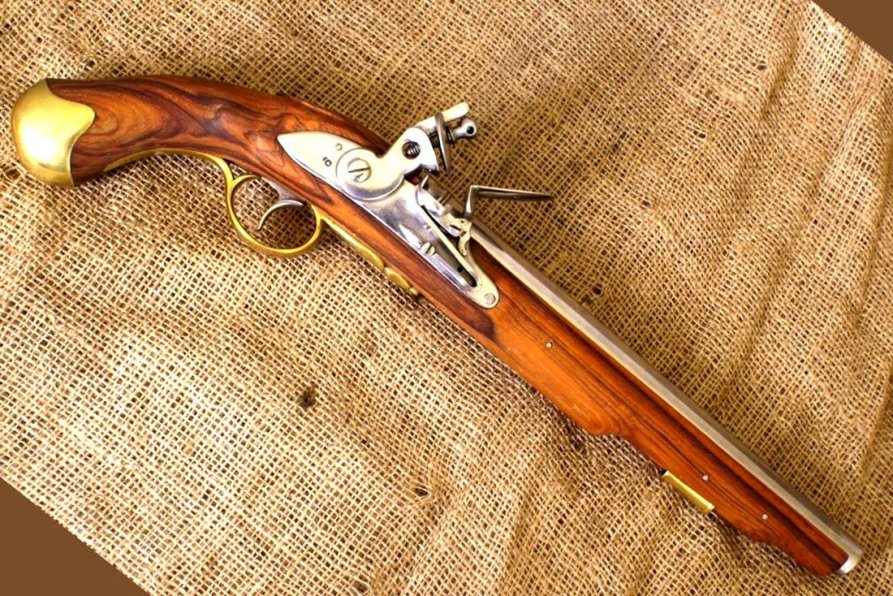 Functional replica of a military pistol with flintlock from the turn of the 18th and 19th centuries. Source: private collection

Replica of a handgun using flintlock, England, second half of the 18th century. Source: author's archive

In England, the production of handguns began at the beginning of the 18th century, and brought several interesting designs. The shape of the pistol was simplified so that the weapon did not damage the pocket. For this reason, the lock or the ignition mechanism was moved further towards centre of the barrel, so as to “hide” and fold the trigger into the weapon. The trigger was then only unfolded and “sticking out” when the weapon was loaded to be fired. 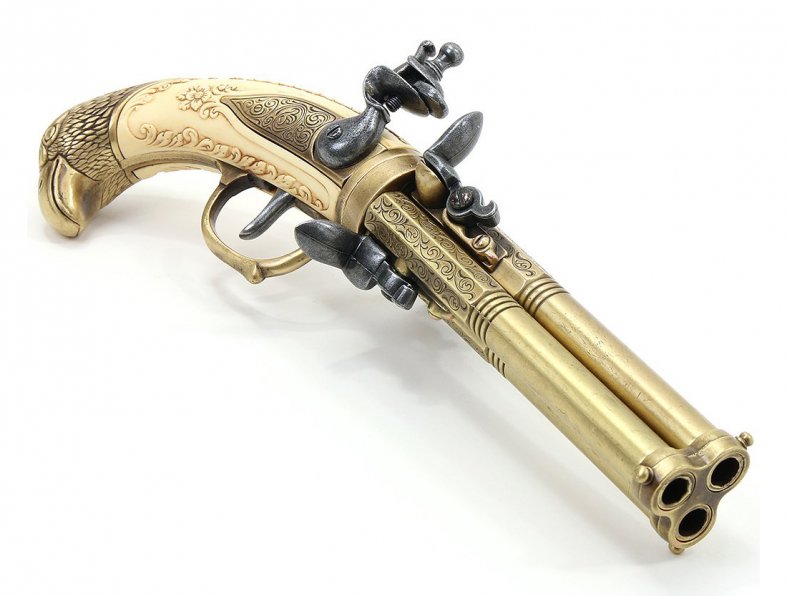 Because of the time needed to reload the weapon, the number of barrels gradually increased. At the same time, though, the gun was getting heavier, so the length of the firearm was getting shorter in order to reduce the excessive weight. The new design - pocket pistols - had shorter barrels resembling a pepperbox, or multiple barrels side by side. The pocket pistols provided a relatively large dispersion of projectile and became popular among travelers, who used them for protection against bandits. Sailors used pistols for man-to-man fights aboard. Small pocket pistols were also popular and were often combined with a folding dagger.

These weapons are in many cases unique, although they were later produced not only in England but in other places in Europe. 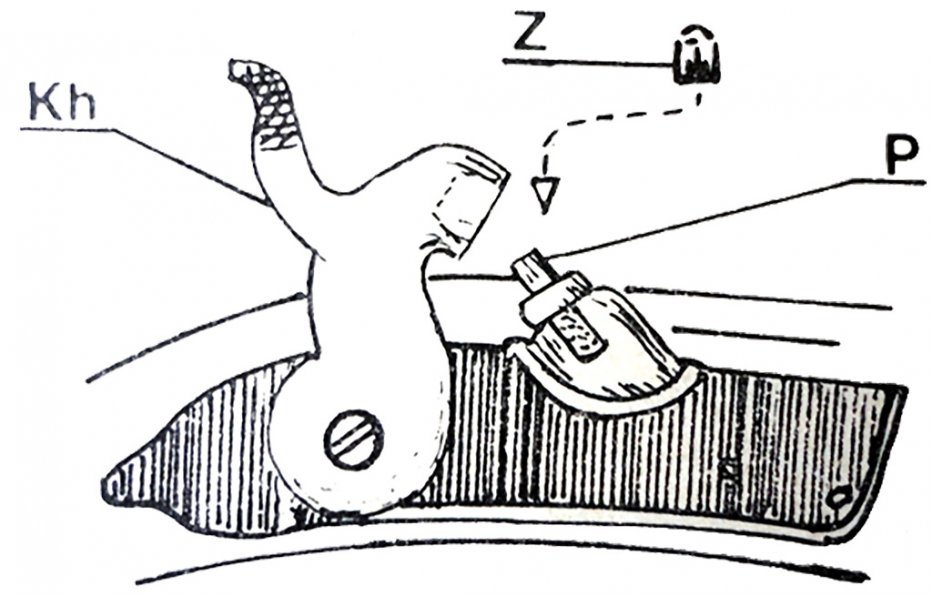 Percussion lock. In comparison with a matchlock, percussion lock is a less complicated mechanism: Piston P or percussion cap was placed on a hollow nipple (Z) located above the barrel. Cap contained a small amount of explosive. The hammer (Kh) protected the shooter from the shrapnels. When the percussion cap is struck with the hammer, the impact sensitive explosive sets off the gunpowder and the gun fires. Source: author's archive

Explosive compounds invented in the late 18th century could be detonated upon impact or simply just by heating them up. Alexander Forsyth, a Presbyterian minister, produced a revolutionary percussion lock using fulminating (detonating) chemicals to prime gunpowder. His invention became one of the most important milestones in the history of firearms.

He managed to combine a unique chemical that would be later used for producing matches. He also produced a new version of the percussion lock (French word percussion means “strike”). Forsyth was annoyed at the contemporary flintlock mechanism and decided to re-invent it. He extended the priming hole to the outside and added a container that held his primer (the “scent bottle”). The blow of the hammer pushed a loaded rod down onto the priming composition. His percussion lock is improved French percussion lock. 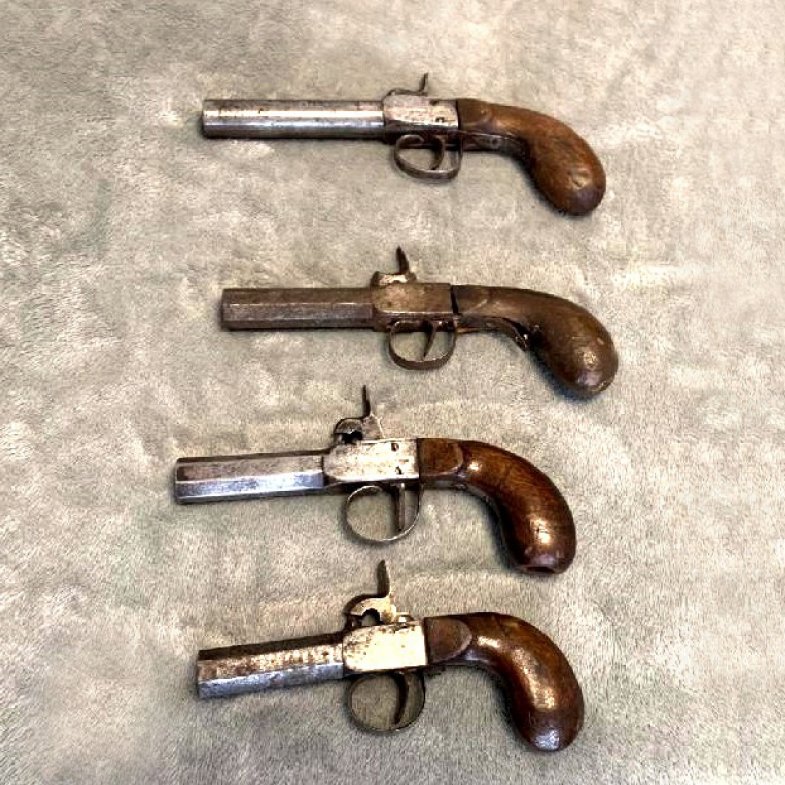 Pistols in Battles and Elsewhere

Pistol shots were heard in other places than just battlefields. In the 16th century, officers also began to use pistols to settle private disputes. By the middle of the 17th century, they stopped using the expensive wheel-lock pistols and used shorter flintlock pistols instead. Duels were initially fought on horseback. The rivals rode against each other and fired from a short distance (they should not fire at the enemy till they saw the white of their eyes).

Special duel pistols developed from military pistols between 1760-1775. Duel pistols were made with great precision and attention to detail, and for officers, they were the first choice for a personal weapon. The manufacturers stored the duel pistols in cases along with a full loading kit and tools necessary for cleaning.

In the 19th century, people started using pistols with percussion lock for duels.

In the absolutist states formed in the course of 17th and 18th centuries, the status of the military officers in the army came with several “customary” privileges.

Some of these customary privileges were controversial from our today's standpoint, for example the right to a duel in case the officer felt insulted. If an officer refused to take part in a duel, he would be disqualified in the eyes of the soldiers and lose all respect. In an absolutist state, however, it was not permissible for individuals to settle their scores as they will. Personal disputes were settled with the help of courts or military commanders.

Nevertheless, duels continued to take place. In 18th-century France, duels eventually turned into ordinary brawls. Messy squabbles between noblemen and various adventurers quickly became popular and attracted audience. Duels “of honour” also spread in other countries and became part of customary law. Numerous monarchical edicts were issued, banning the practice under the punishment of death of confiscation of property, but not even that prevented duels from taking place. Pistols were preferred duel weapons, because they didn’t give any advantage to younger and stronger opponents. In duels fought with sabres, the older or shorter men were at disadvantage.

…is an arranged combat between two people, fought with pistols or fencing swords […]

Rules for duels were formed towards the end of the 18th century and onward. The participants of the duel wore a dark suit with the collar turned up to cover the white collar of their shirt. They usually began the duel standing sideways. The duels had agreed rules and apart from the two participants, “seconds” were present as their assistants, and sometimes, a physician. Pistol duels on horseback, on the other hand, had next to no rules. They were similar to an encounter on the battlefield.

Duels were many times outlawed, and there was a lot of legislation banning duels, but that didn’t stop men from seeking ‘satisfaction’ for offenses committed against them. Duels continued to take place until the end of the 19th century. By the beginning of the 20th century, duels gradually disappeared, just like many other customary privileges of the upper class. 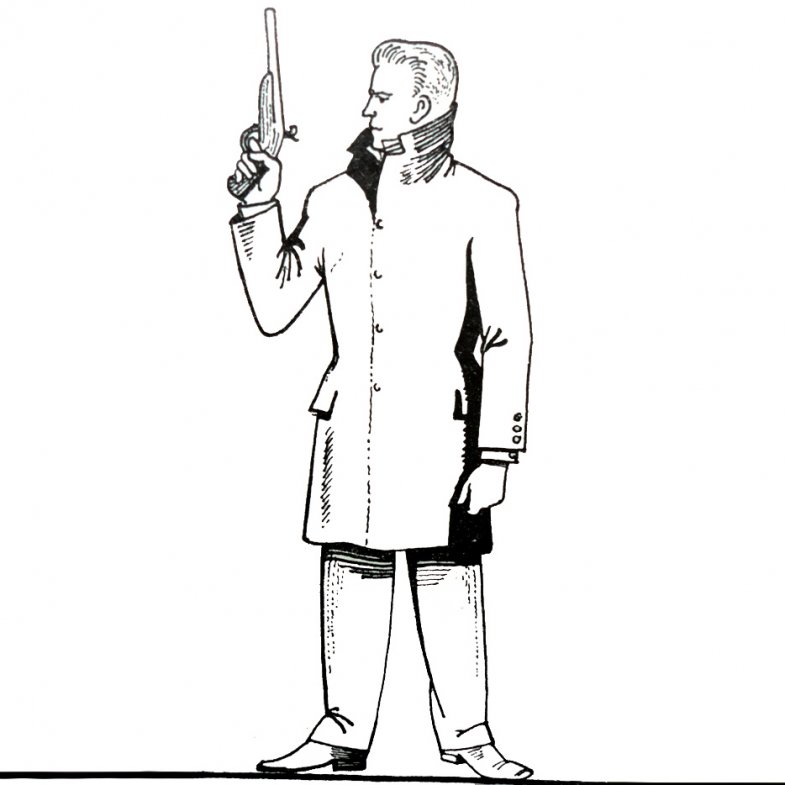 Basic fighting stance of the duelist was sideways, because this minimized the chances for the opponent to hit. Source: author's archive

Famous Adventurers in a Duel

Duels took lives of many famous personalities of the past, including the Russian poets A. S. Pushkin and M. J. Lermontov. Giacomo Casanova (1725-1789) was also a participant of many duels of honour. During his stay in Warsaw in 1766, he challenged in writing the holder of the Order of the White Eagle, Count František Xaver Branicky (1732-1819), to a duel. Casanova later provided the report from the duel in his Memoirs. 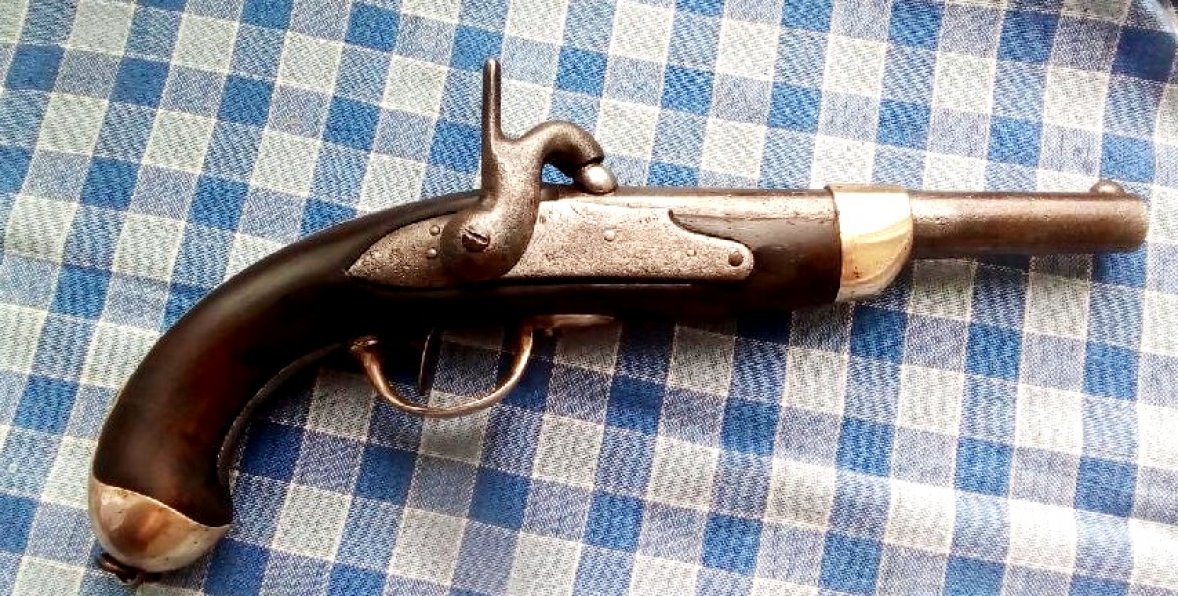 Branicki accepted the challenge and chose pistols as the weapon. The duel took place on the same day (March 1766) around 3 pm in the village of Wola near Warsaw. Branicki's assistant tried to persuade the two rivals to abort the duel. But he didn’t succeed. "I threw off my coat," Casanova recalls, "and at Branicki's motion, I took one of the [pre-loaded] pistols. Branicki took the other pistol and, upon his honour, vouched for the weapon I had chosen.

,I shall try it‘ I replied, by shooting at your head.‘ He went pale, threw his sword aside to one of his assistants, and showed me his bare chest. 'I was forced to do the same, but I regretted it later, because the sword was the only weapon I could used after firing the pistol. Then I also showed him my bare chest, and I made five or six steps back. He did the same, it was not possible to go any further than this. Seeing him stand still and hold the pistol down, just like I did, I took off my hat and invited him to do me the honour and shoot at me first. Then I put the hat back on my head.

He didn’t fire immediately. He spent 2 or 3 seconds hiding his head behind the gun while trying to aim at me. I lost my patience. I didn’t want to wait until he is finished with his preparations. I aimed with my pistol and fired. Our pistols fired at the exact same moment. People who heard the shots later confirmed that they only heard one shot and not two, so we must have fired simultaneously. I felt pain in my left arm and I hid the wounded hand in my pocket. I saw that my rival collapsed to the ground and rushed over to him...”

Both participants of the duel were wounded (Branicki was shot in the abdomen) but both made it safely to Warsaw. The duel, duly conducted according to all relevant rules, met with approval among the Polish upper class. Since duels were banned under contemporary law and punishable by death, Casanova sought asylum in a Franciscan monastery. The king, however, pardoned both and sent officers to attend to their wounds.

This duel has a relatively happy end. But other duels ended with a tragedy, with the death or serious injury of one of the participants, sometimes both. 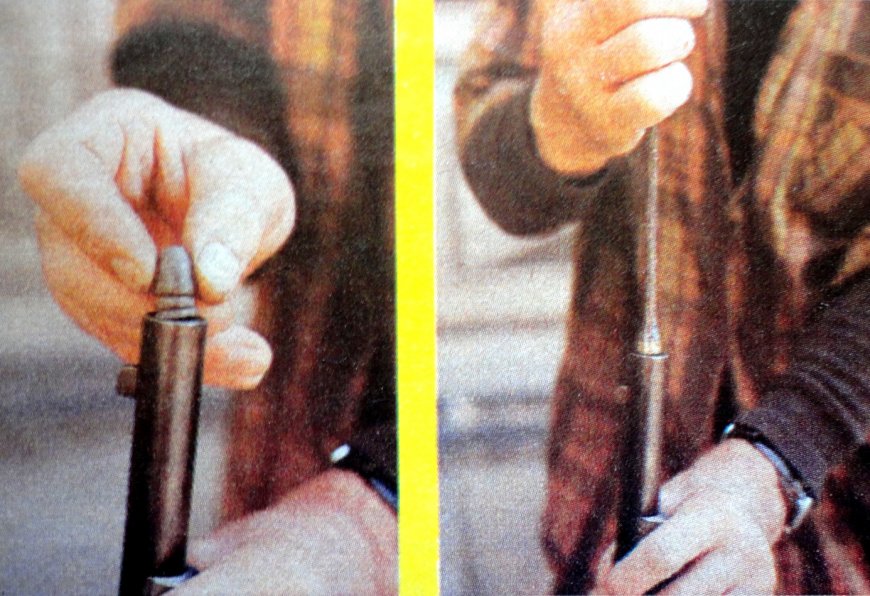 Firing from the firearm loaded through the muzzle is pretty complicated: first, black powder charge is loaded into the barrel and then a rod is used to compress it, patch and ball is placed on muzzle and press again. Next, fine powder is placed onto the pan (flintlock) or a primer is added to the piston (percussion lock); then the hammer is cocked to the safety position. Then the hammer is cocked, and trigger pulled. A deafening bang ensues, along with a cloud of smoke … Source: author's archive