Home ArticlesInteresting facts of the past The History of Crusades - Part 1: The Conquest of Jerusalem and The Rise of Knightly Orders

The History of Crusades - Part 1: The Conquest of Jerusalem and The Rise of Knightly Orders 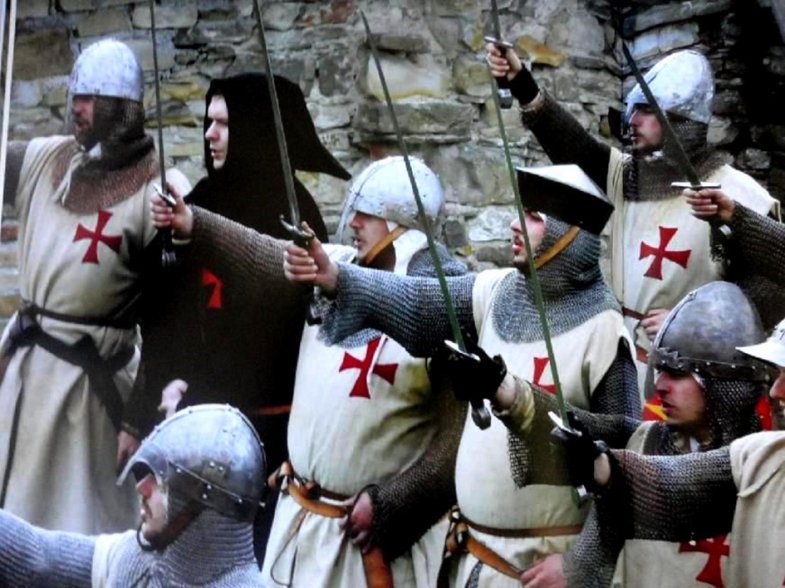 The Crusades originally had a “Divine purpose” – their mission was to liberate the city of Jerusalem from Muslims, or Saracens. The Christian world launched the Crusades in order to check the spread of Islam and retake control of the Holy Land. The Pope called the Christians in Europe to war against Muslims, and many European rulers accepted the invitation, launching large-scale military operations of their own.

Crusader armies assembled in major cities and ports, bringing together warriors from different parts of Europe for the first time in history: warriors of different cultures, manners, costumes, and armour, united under the banner of Christianity. Many of them stepped out of their castles and homes for the first time, embarking on an uncertain journey through the unknown lands, sailing the seas that had previously been known only to merchants. The end of their journey – the Near East - was previously known to them only from rumours and stories.

The First Crusade was initiated in 1095 by Pope Urban II and ended in 1099 by the victory of the Crusaders. The Christian armies were led by the French, who were allied with the army of the Byzantine emperor Alexius I Comnenus. Together, they successfully captured Jerusalem, and the Alexius annexed the conquered territory to his empire, but he granted the administration of the territories to the French. This alienated the Pope, who considered the conquered territories the property of the Church.

All nine Crusades occurred between 1096 and 1271, and they all attempted to conquer and re-capture the Holy Land – the name used for the territories and places associated with the ministry of Jesus Christ. 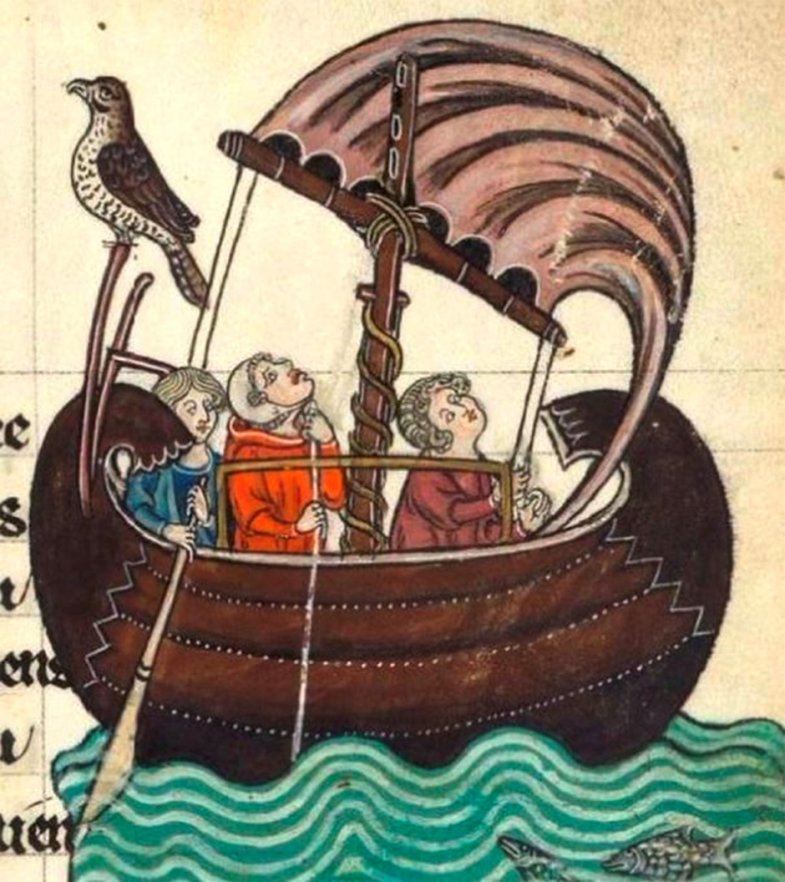 A Less Known Role of the Bohemian Lands in Crusades

Another Crusade was initiated in 1147, and the Czechs, led by Prince Vladislav II, joined the expedition to the Holy Land. The Second Crusade was organized by the German Emperor Conrad II, and Vladislav and his armies accompanied the emperor - Vladislav as his liegeman (a person who is granted land in exchange for support to the feudal lord, including military support). The outcome for the Bohemian expedition was devastating - Vladislav’s marshal Jirik died, and the ducal chancellor Bartholomew was taken prisoner, disappearing without a trace just like many others. The Christian armies suffered several defeats on the way. Most of the Bohemian warriors did not survive the hardships of the journey, or the diseases and the encounters with the enemy. Prince Vladislav himself survived, because he left his army before the battles began, and travelled to Constantinople to visit the Emperor Manuel I Comnenus, an enemy of Conrad and the Pope. He offered his friendship, collected gifts and hastily returned to Prague. 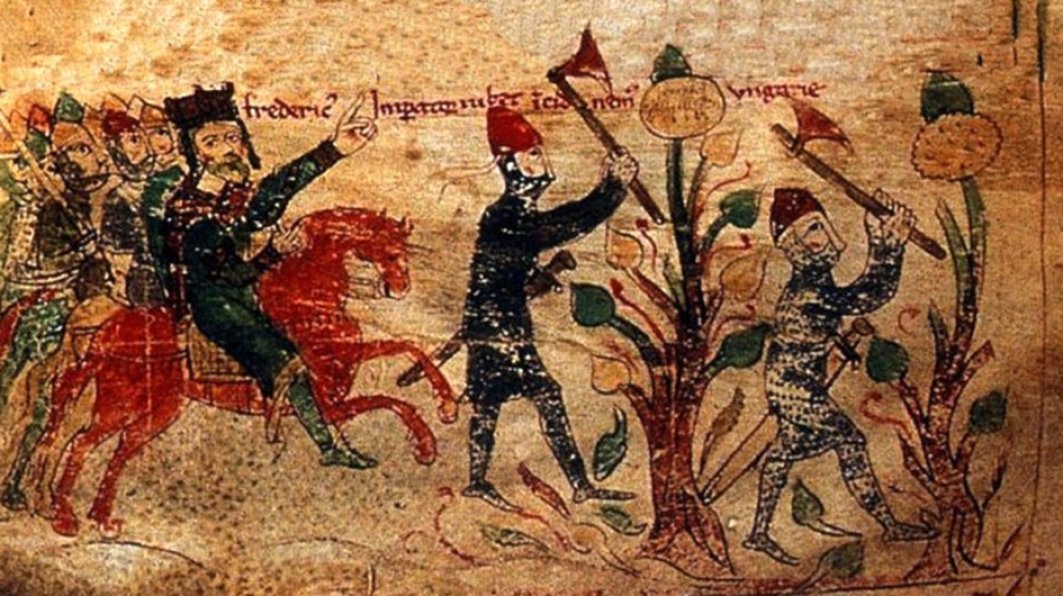 Redbeard and Lionheart in the Kings’s Crusade

After the battle of Hattin (4th July 1187), which ended with the defeat of the Christian armies, and after losing Jerusalem to the sultan Saladin, the Pope initiated the Third Crusade (1190-1193) into the Holy Land. The Third Crusade was led by three European monarchs, including the Roman Emperor Frederick Barbarossa (“Redbeard”), and Richard I of England (“Lionheart”). The Third Crusade was also known as the Kings’ Crusade.

Richard the Lionheart, and his French rival, King Phillip II of France, have both sailed to the Holy Land by sea. The brave English king was taken captive on the way back and returned to England in 1194. Lionheart was famous for conquering Cyprus and a Syrian fortress Saint Jean d’Acre. Upon returning to England, Richard I consolidated his power, gathered resources and launched a war against the French king Phillip II Augustus. Richard died during the siege to one of the French castles. 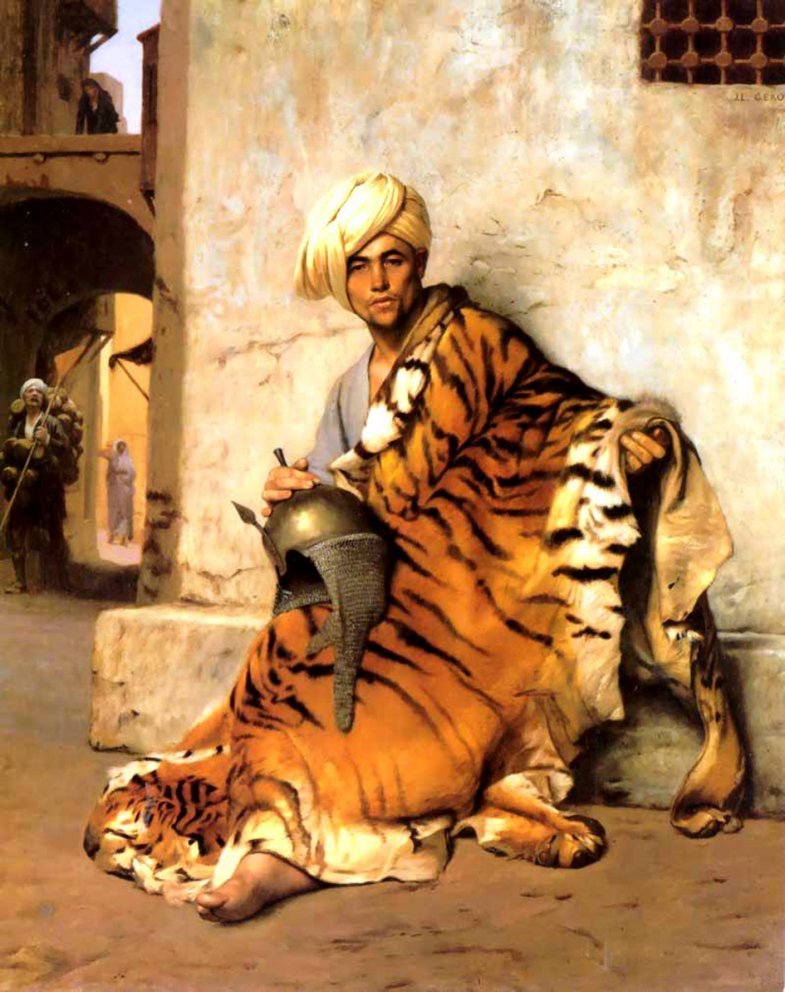 The Sword of Christian Warriors

The quintessential sword of the crusading knight, the Norman medieval sword, originally had a wide blade and mushroom-like pommel. The sword developed in time and underwent several changes. The blade became longer, and the pommel took shape of a circular wheel with a Crusader cross in it. 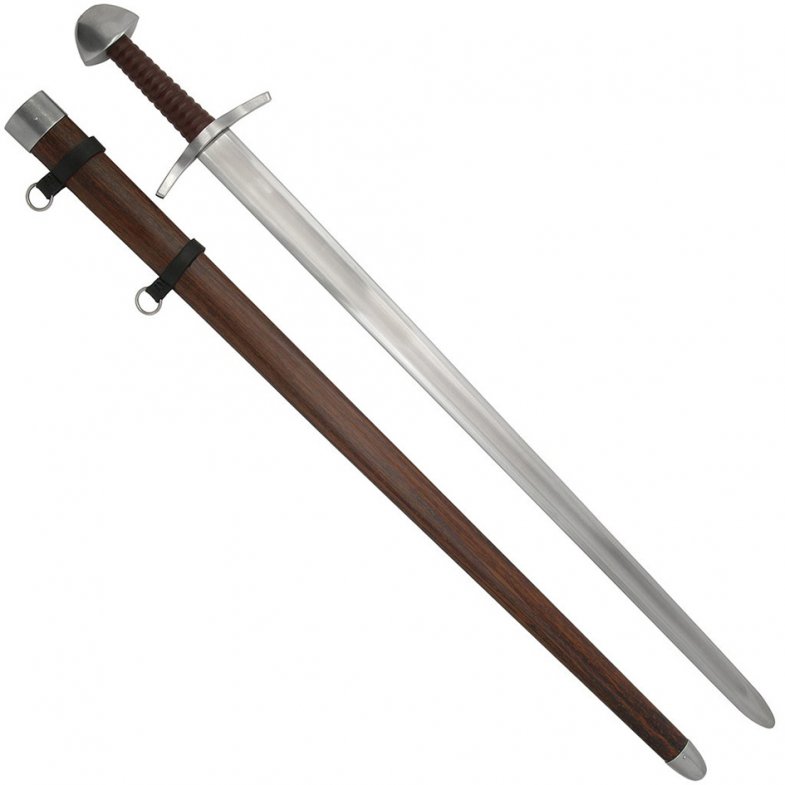 The cross was the emblem of Crusaders and appeared on various parts of their armour, weapons, and clothing.

As one of the participants of the First Crusade put it:

The Cross of Our Saviour which I have taken up as a pilgrim, I want to wear on my shield, on my helmet, and on all my weapons, saddle, and bridle, so that whoever confronts me may know that he is lifting his sword against the warrior of Christ.

The symbol of the cross marked the weapons used against the Muslim warriors (whose symbol was a crescent), and remained on the Crusader swords till the 16th century. 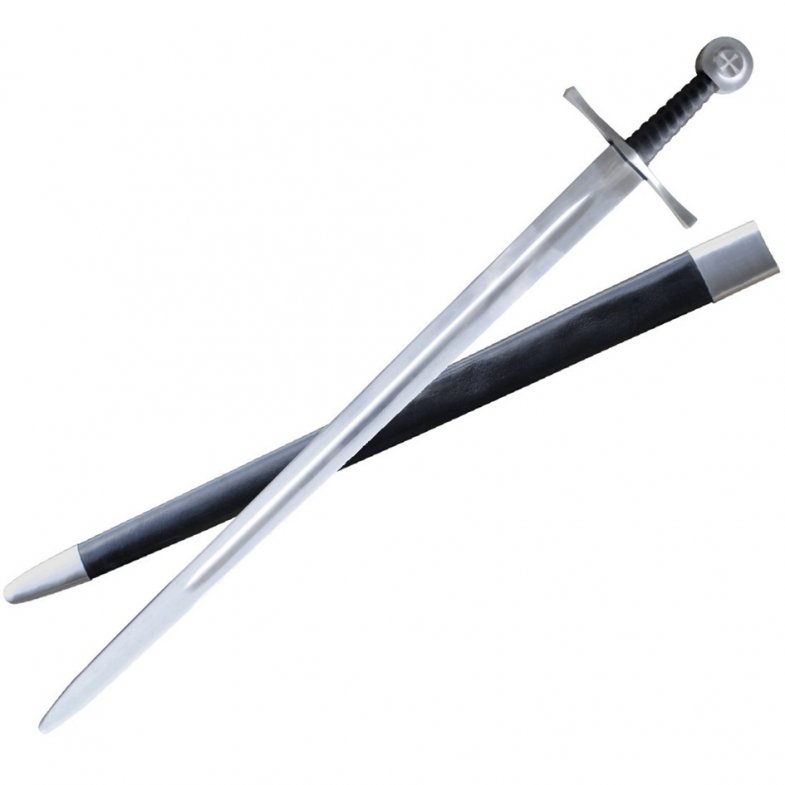 Backbone of the Crusader Armies

Heavy cavalry turned out to be the essential backbone of medieval armies, as already proven in the times of the Frankish empire, before the Crusades. In the 11th century, heavy cavalry dominated the battlefields, inflicting many crushing blows to the (often numerically superior) Muslim armies. 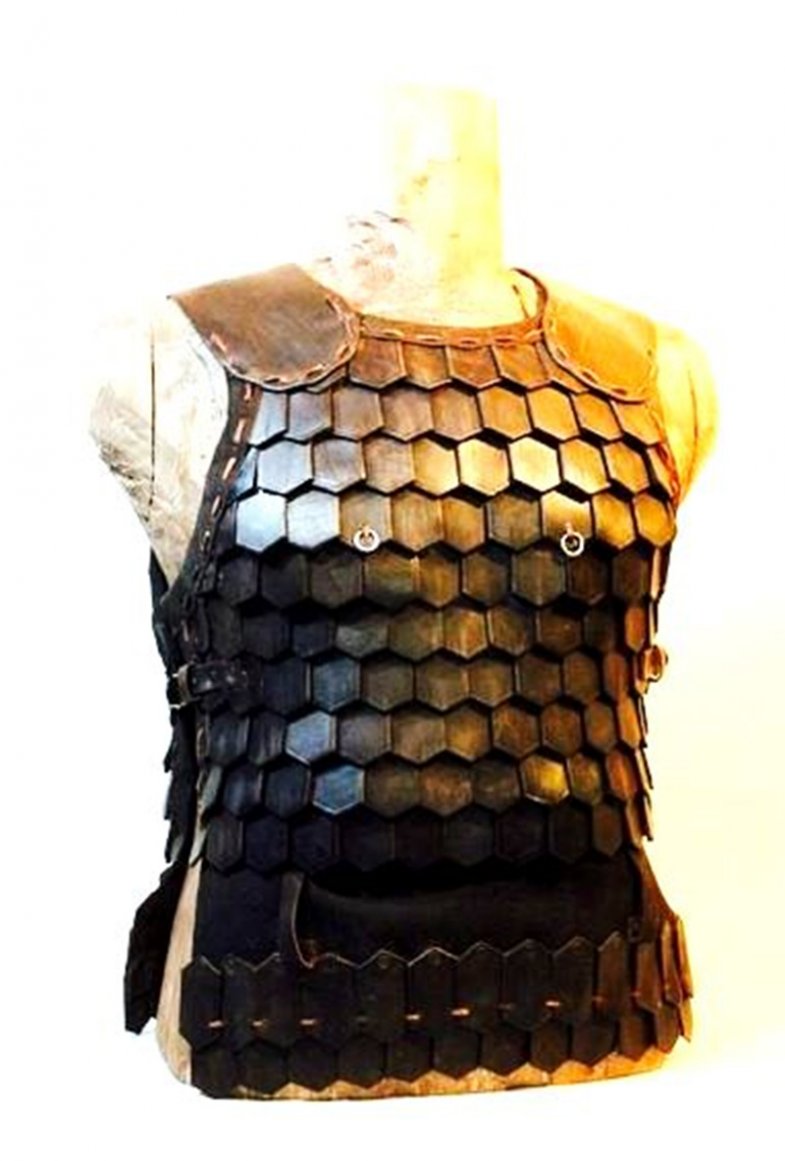 Cavalrymen with heavy armour were trained professionals, skilled in horsemanship as well as combat. They had to get their own horse and very expensive armour and weapons. A Crusader during the first Crusades typically wore a type of armour consisting of long chain mail, or a scale or lamellar armour. Compared to lamellar armour, a chainmail armour was lighter and more practical for hot climate of the Holy Land. An example of a well-preserved chainmail armour is the armour of St Wenceslas of Bohemia. 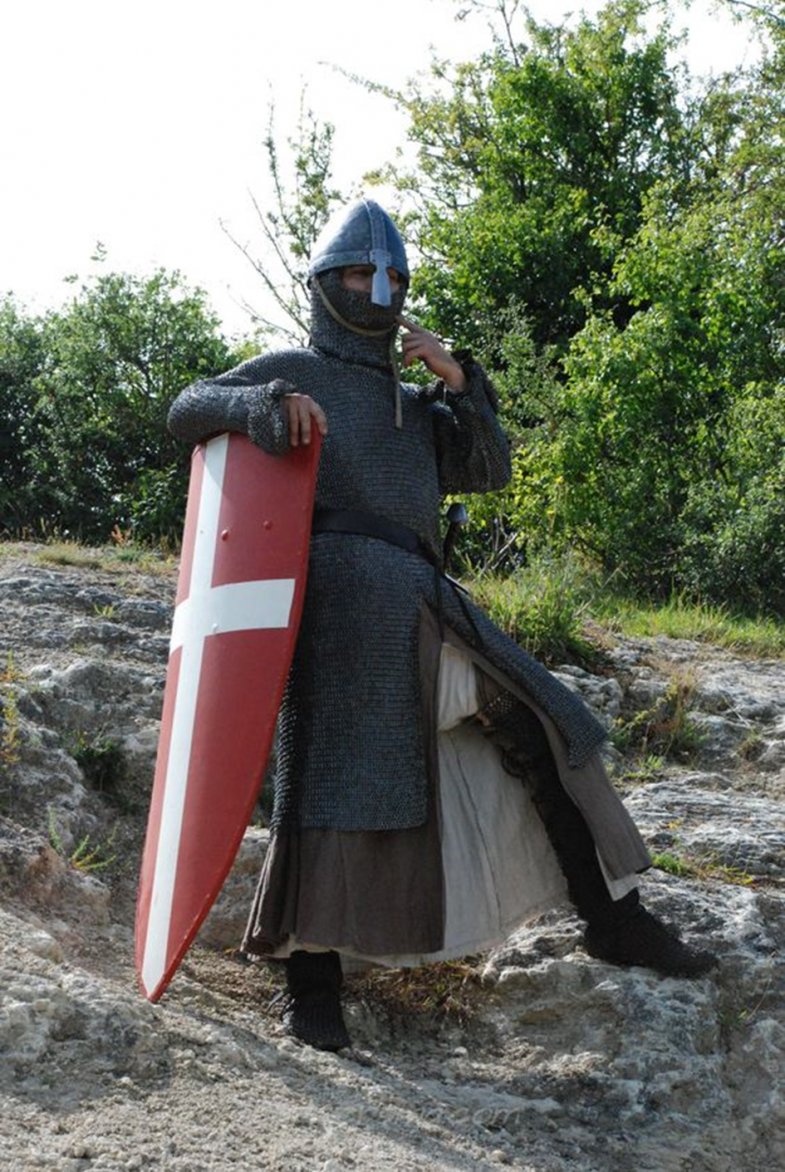 Crusaders wore a Norman-style helmet, for example a Saint Wenceslas helmet. They used spear as the weapon against infantry or cavalry charges, and a kite shield for defence.

Soon enough, differences and disputes began to appear between parties from different cities and regions. In 1189, the French started wearing a red cross, while the Englishmen used a white cross, the German black cross, Italians yellow cross, and the Flemish green cross.

Catholic military orders began to appear in the 12th century, such as the Order of Knights of the Hospital of Saint John of Jerusalem (Knights Hospitaller), the Order of the Holy Sepulchre, or Knights Templar. Knights Templar later became the army of the Church. Knightly orders were founded and sent on missions into the Holy Land as well as against the heretics in Europe. 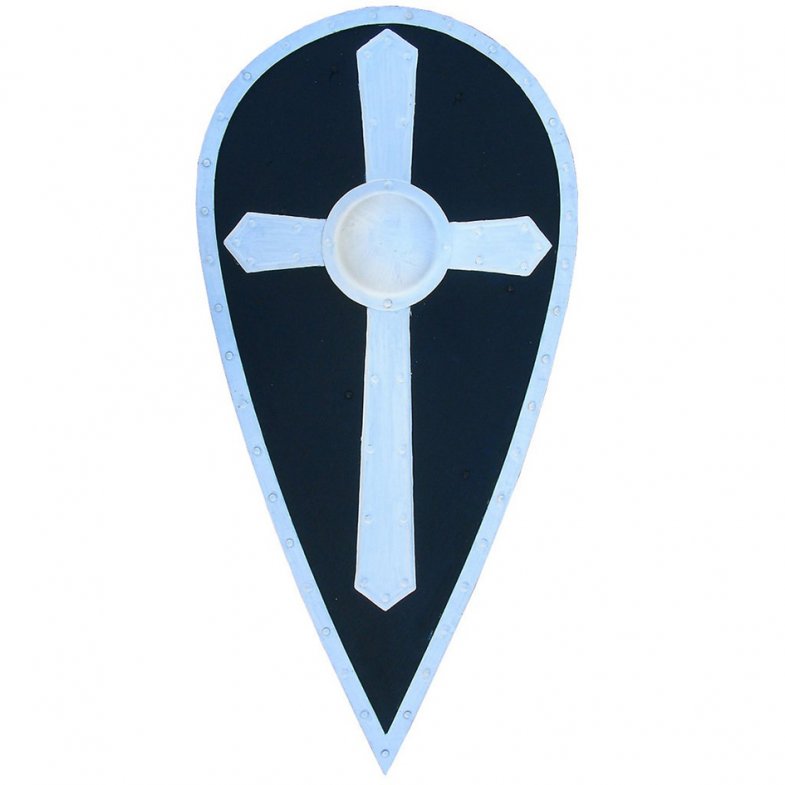 Knights Templar were one of the three most powerful medieval orders. The original name was Poor Fellow-Soldiers of Christ and of the Temple of Solomon. The order was founded around 1220, originally to provide protection for pilgrims traveling to Jerusalem and other holy places. The Templars swore an oath of chastity, obedience and poverty.

The order gradually grew in power, breaking free from the influence of kings and popes, and amassing vast fortunes. In some European countries, the Templars created independent cells of power, they became advisors to kings, to the Church, developed innovative banking infrastructure and a network of fortifications.

The golden era of the Templar order ended during the reign of the king Philip IV of France, who was deeply in debt to the order, and drawn up a plan how to arrest Templars and seize their property. He accused the Knights Templar of apostasy, sodomy, and secret rituals. In 1318, the Templar Order was dissolved and abolished in France and subsequently in other countries. 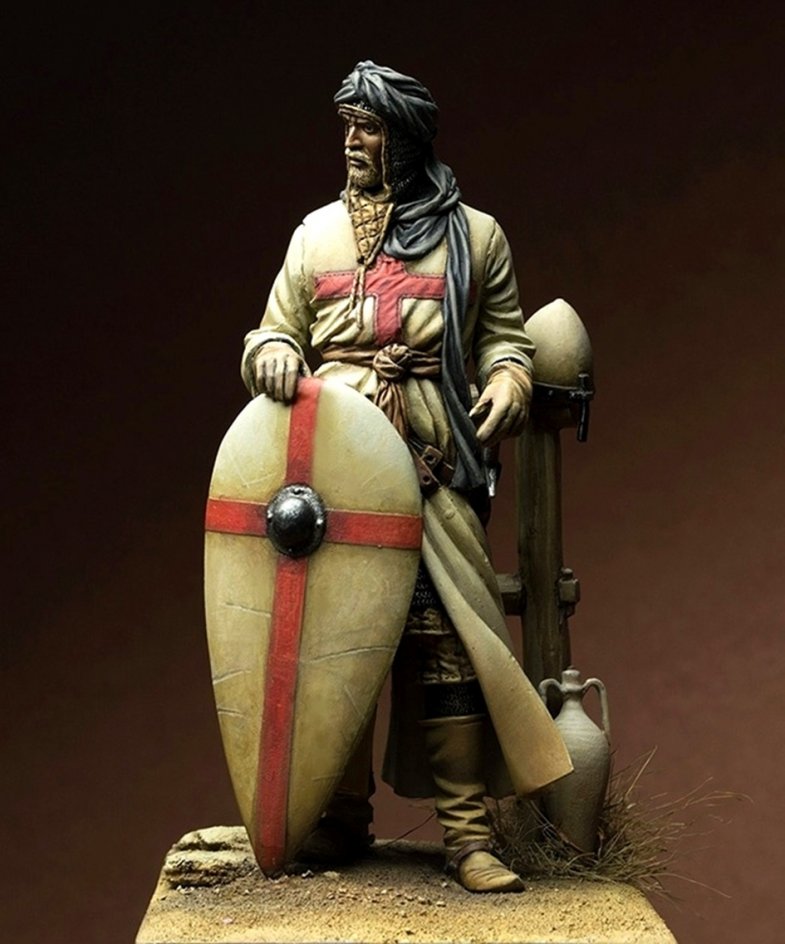 The Order of Knights of the Hospital of Saint John of Jerusalem, commonly known as the Knights Hospitaller, was founded in the 11th century. They founded hospitals and provided care to wounded Crusaders and pilgrims. One day, their hospital was attacked by Saracens, and the monks grabbed weapons to defend their lives. They never put the weapons away and became a military religious order. The commanderies of the order were located in different parts of the Western world. When Palestine was conquered by the Saracens, the order moved to Rhodos. The island was, however, conquered by the Turks in 1522, so the order had to relocate to Malta, and became known as the Knights of Malta. Some of the organisations today continue the Hospitaler tradition.

Note: Special thanks to the “guild” - Cech Terra de Selinan, Slovakia - for providing the central photo.