Home ArticlesOnline store Why not to do business with Hind Handicrafts

Why not to do business with Hind Handicrafts 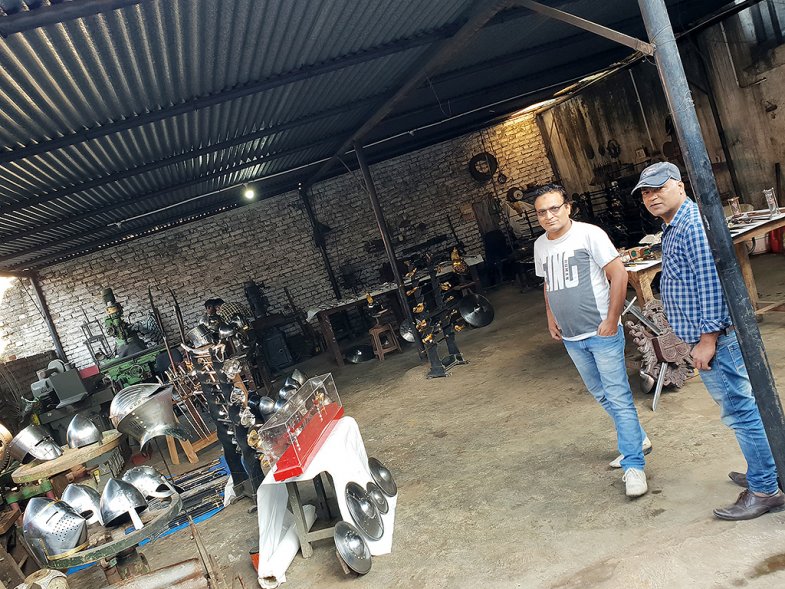 In the fall 2018 I visited several companies producing historical replicas, that could be sold in our internet store. One of them was the following company:

The company Hind Handicrafts is registered on the name of Mr. Shahzad Nizam´s mother. Her name is Afroz. I have never met her. She may be just a straw woman. The only whom I dealt with was Mr. Shahzad Nizam. As my stay in India was short, I had to make a perfect time planning, so that I was able to meet all interesting makers. Mr. Nizam was the only who failed to appear on time. As I am quite an industrious person, I agreed on  a meeting early next morning outside my time schedule.

According to his words – in this company work 5 brothers and 9 ancillaries. They do not have an export licence, but can export by means of another company.

The real boss of Hind Handicrafts Mr. Nizam showed me their workshop and presented nice replicas of bladed weapons, helmets and other armor parts. Mr. Nizam assured me during our initial meeting that their delivery times were about 4 weeks but they request 50% advance payment.

As I was happy with the quality of wapons I was shown, so I agreed on making a test order, which I did when I reached back home to Czech Republic. All the family members and the workers were very polite and helpful during my visit. I was delighted by this experience.

I compiled an order comprising of 232 A4 pages and got an offer of 8400 EUR as a total price for the initial set of samples. I confirmed and placed an official order on 15th November 2018 with the following condition: “The order has to be finished within 10 weeks after placing the order. If not finished, all payments have to be paid back to the buyer.”

I wanted to give the guys from Hind Handicrafts enough time to make the starting order precisely and with no haste. As the expected time of dispatch (end of January 2019) was drawing nearer, I wanted to have a list of finished items. On 10th January Mr. Nizam reported 82 finished items from 185 in total. As it was just 44%, I started to be afraid, that the (even generous) delivery deadline will not be met.

I wanted to give the starting (and hopefully long-term) cooperation to give one more chance, so I shifted the deadline to 18th February. I really wished the initial experience to be excellent. I asked of an updated list of finished items, packing list and invoice on 16th February. After several reminders I got a list of 93 items finished (approx. 50%).

On 20th February Mr. Nizam wrote to me “I m working on inv and packing list after everything packed and box I will inform you soon”.

On 26th February I asked for the packing list and invoice again, to which I got the reply “Ok I send you in 2 hr”. Unfortunately, nothing was emailed to me on that day later... As no other communication followed, I decided to cancelled my order on 1st March.

During this bad Hind Handicrafts experience, I have lost 4.200 EUR and about 14 weeks of working time (order preparation, clarifying unclarities, courtesy communication). The only what I can do now is WARN anybody else, who is going to cooperate with Hind Handicrafts managed by Mr. Shahzad Nizam, not to do that.

As Outfit4Events is a professionally working internet store, we cannot rely on suppliers that:

Thank you for reading this case.
Respectfully,
Helmut Vajc, CEO
On 5th March 2019

P.S.: All communication with Hind Handicrafts has been documented and can be used as evidence in case of legal proceedings.