Home ArticlesInteresting facts of the past Czech Illuminated Manuscripts 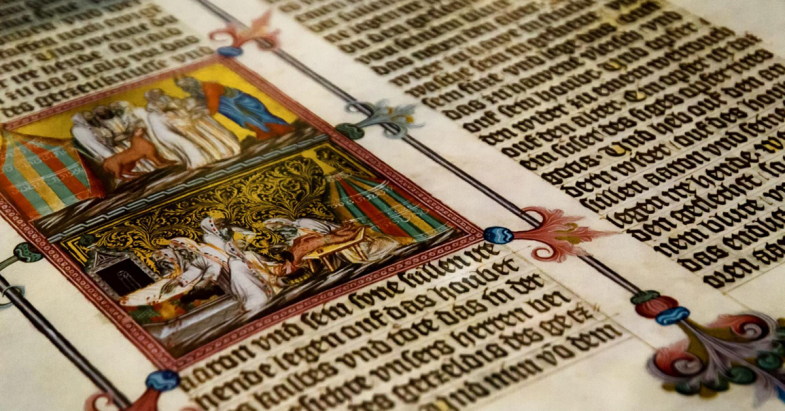 If the words medieval history make you feel curious and excited, you will most definitely love our article on Czech illuminated manuscripts. They are covered in gold, coloured paint as well as mystery.

Before the invention of the printing press (years 1447-1448), books were born in the so-called Scriptorium. It was a place where scribes and illuminators created books by hand. Of course, the Bible and its parts (the Epistles or Psalms) were the most copied books, but the scribes also copied other spiritual texts, chronicles, or important writings.

What Is an Illumination?

Illuminations were coloured images, decorations, and highlights in medieval manuscripts. The person working on illuminations was called an illuminator.

The most common illuminations were decorated initials at the beginning of a book or its chapters. A cheaper option was red, simply decorated initials. Royal or monastic documents could boast of luxurious initials on a gold background.

Some costly and complex manuscripts included full-page decorations with various ornaments or illustrations.

To speed up the process, the illustrators received recipe books full of instructions for various shades of colour, various patterns or outlines for paintings, and various decorating instructions.

Finished illuminations were outrageously expensive. Only the wealthiest could afford them.

The most famous Czech illuminated manuscripts

The ambitious and energetic Kunigunde of Bohemia, a daughter of King Ottokar II of Bohemia and Kunigunda of Slavonia, was also an Abbess at the Monastery of ST. George in Prague.

She was known for her fine taste in art and her interest in remarkable works of art. The most famous work she ordered was a manuscript with five spiritual texts called the Passional of Abbess Kunigunde. The manuscript, with twenty-six unique illuminations, took almost ten years to finish. It was finished at the time of Kunigunde's death, sometime around 1321.

The authors of the illuminations were Prague canon Beneš and the inquisitor Kolda of Koldice, true the experts in the book painting business. The text De strenuo milite from 1312 contained an illumination depicting Jesus Christ as a knight and human soul as the bride of Christ.

The Passional also includes a double-page depicting Kunigunde as a princess crowned by two angels. Her face is slightly blurred, which may be due to the fact it was kissed by faithful believers who considered the pages a relic. 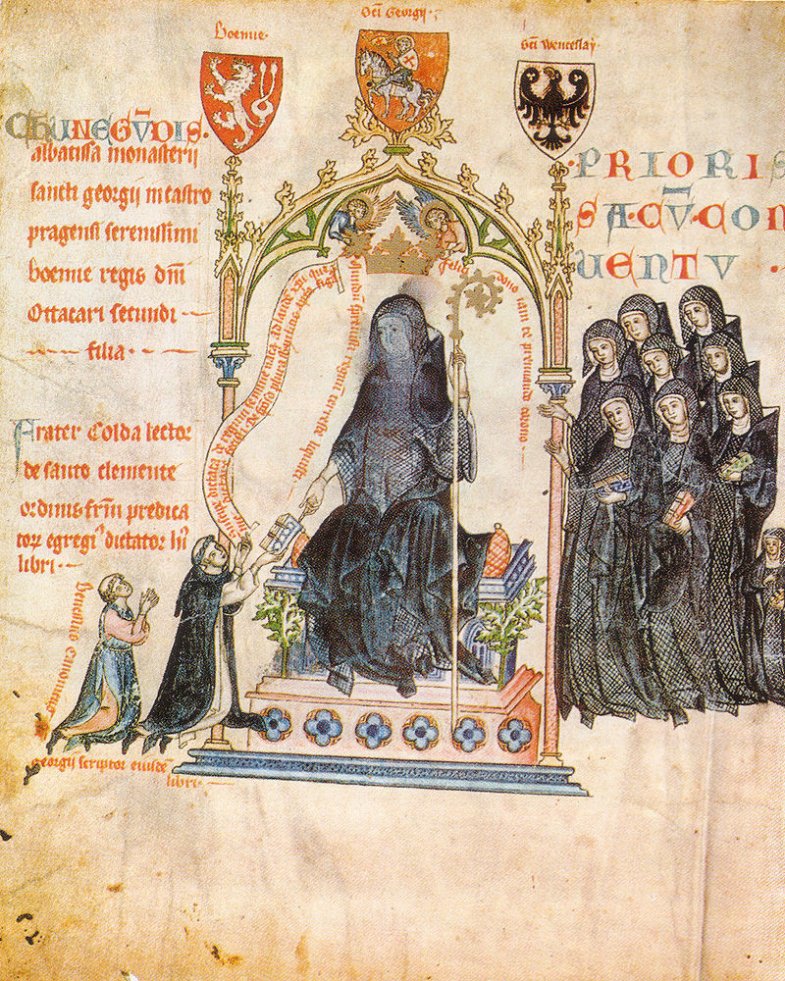 At the end of the 14th century, King Wenceclaus IV of Bohemia commissioned a multi-volume illuminated biblical manuscript, which required the cooperation of at least 9 illumination workshops. Unfortunately, it was never finished, otherwise it would have been the most extensive Czech medieval manuscript.

The book contains richly decorated borders of pages, 654 miniatures and initials, often decorated with gold. One of the most beautiful illuminations is the initial W (or E) with a depiction of Kingfisher, the personal emblem of Wenceslas IV. 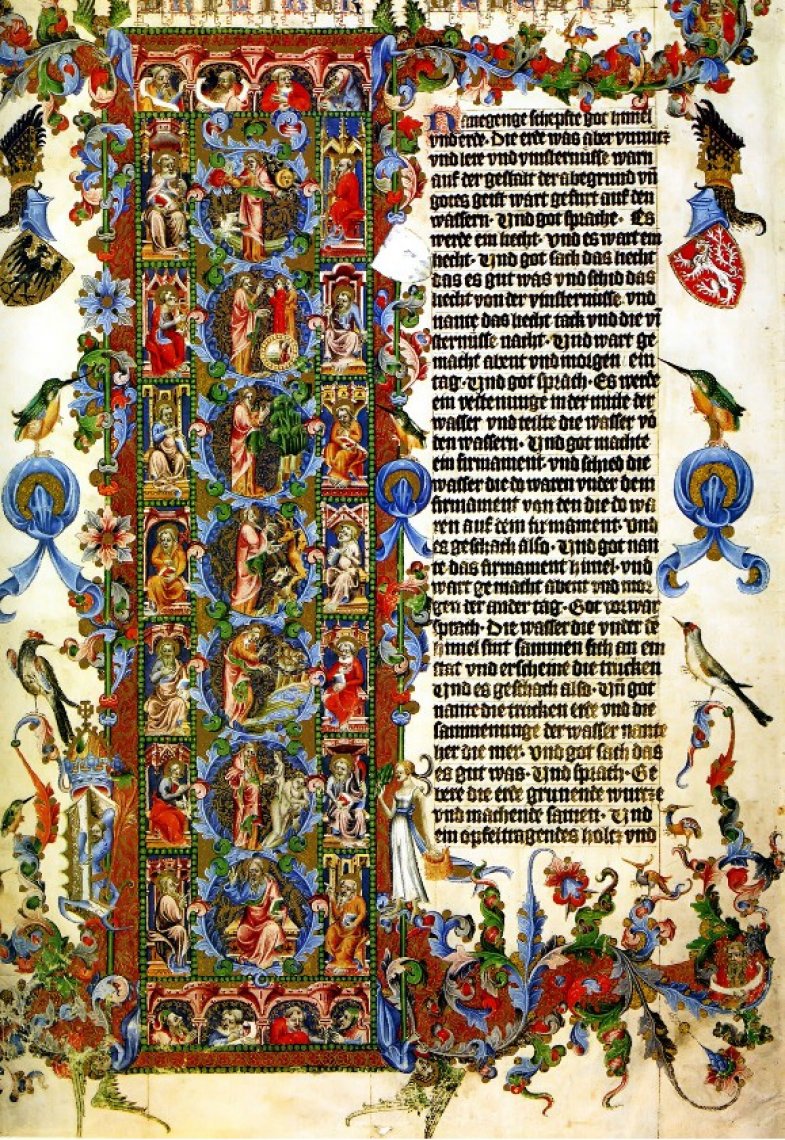 Codex Gigas is the largest medieval illuminated manuscript in the world, with the unbelievable weight of 75 kg. It was also called the Giant Book. Codex Gigas is composed of 310 leaves of vellum, which is 640 pages of the dimensions 89×49 cm. For reasons unknown, eight pages were torn out. The codex's bookbinding is wooden boards covered in leather with ornate metal guards and fittings.

The Codex Gigas was probably created in the early 13th century by scribes from the Podlažice monastery in Bohemia. The manuscript is also known as the Devil's Bible, due to its highly unusual full-page portrait of Satan. Some historians claim that it is the first known depiction of Devil.

There is also a legend surrounding its creation. The legend tells the story of a monk from the Podlažice monastery who set out with his king Ottokar I of Bohemia in Basel to retrieve the Golden Bull of Sicily. In Basel, the monk met a magician who explained to him the secrets of black magic and taught him satanic rituals.

Upon his return to Podlažice, the local abbot discovered the monk's sinful behaviour and ordered him to be walled up alive. In order to escape punishment, the monk vowed to write the greatest book overnight containing all the knowledge of the world.

It was clear the task was impossible, so the monk asked the Devil for help. The Devil, despite his aversion to the Bible, created the book and added to it several incantations, which could be used to track down a thief or to cure a sick person. However, in the entire manuscript, there was no incantation to exorcise the Devil. As a token of gratitude, the monk added a portrait of the Devil into the Bible. 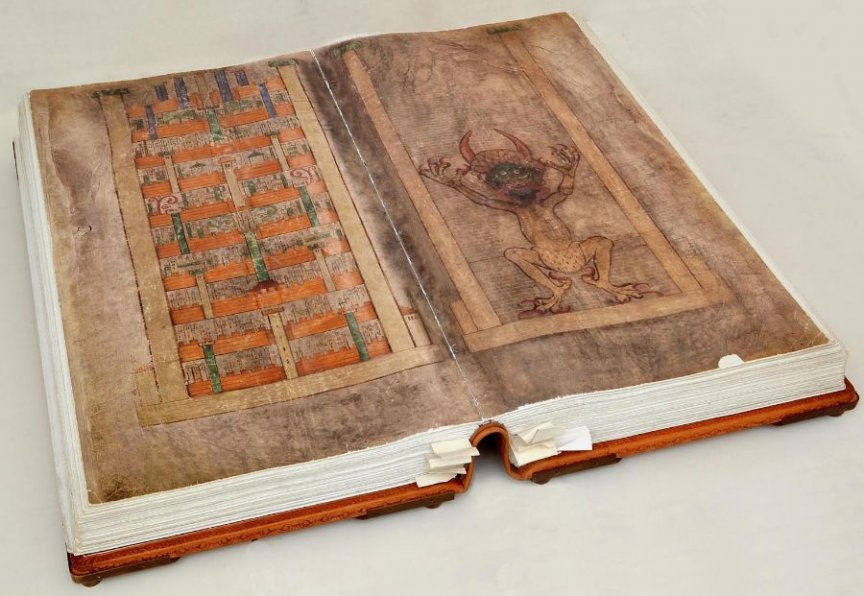 Are you interested in medieval topics? Check out our article about historical shields and learn more about the mysteries of heraldry.