Historical Evolution of Armour from Antiquity to the High Middle Ages 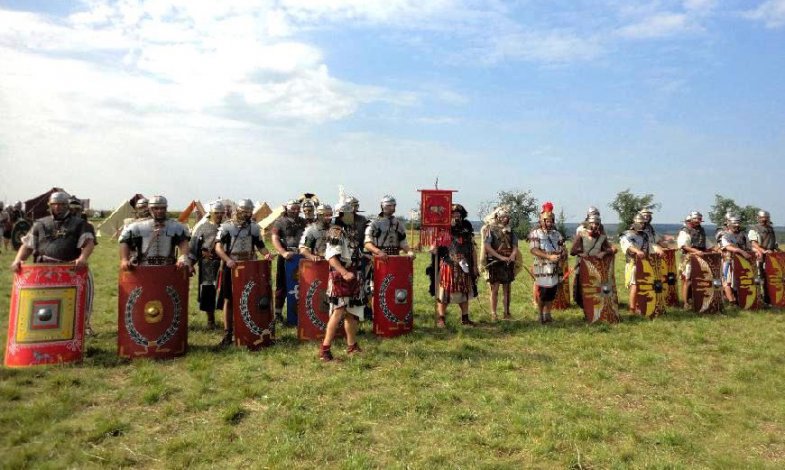 Are you interested in how armour evolved throughout the ages? Read our article to find out what protective clothing and materials our ancestors wore to battles. Learn which type of armour offered the most effective protection against weapons in combat.

Sometime, somewhere in the ancient world, people started thinking about how to protect themselves in combat against various types of weapons. The first armours were made of available materials - animal fur and thick leather. Gradually, primitive armour types were invented made of wood or bone pieces. With the development of mining and metalworking, people started making armour from overlapping copper or bronze scales, and later, bronze cuirasses, helmets and shin guards followed. 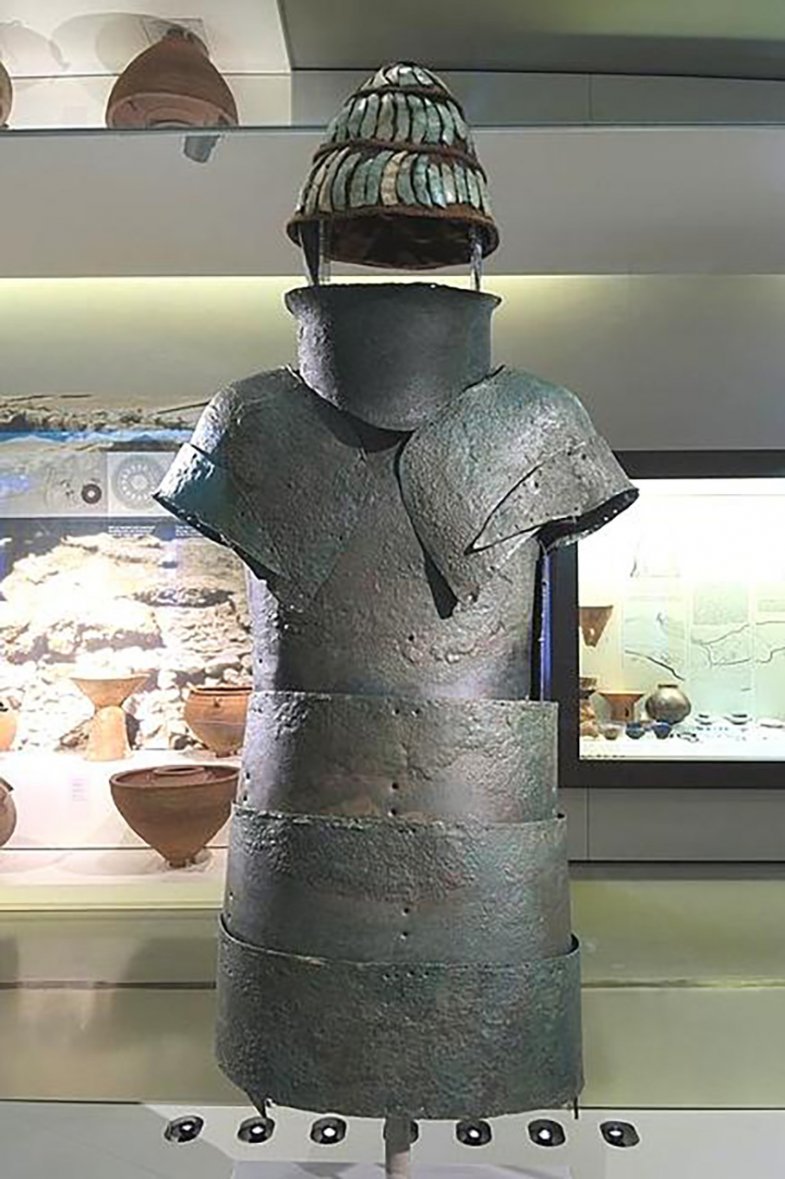 A Mycenaean heavy armour made of bronze plates, with a leather helmet covered with boar tusks (ca. 15th century BC), exhibited in the Archaeological Museum in Dendra
Source: Edgar Pachta’s archive

Armour of the Greeks, the Romans and the Celts

The heavy infantry of Ancient Greece, or hoplites, used simple armour types or bronze cuirasses of the bell or muscled variety. A muscle cuirass was a type of armour that was designed to fit the wearer's torso, typically shaped as a muscular male torso. They also used armour made of layers of linen and metal plates - a more affordable version for those who could not afford a bronze armour.

The Corinthian helmet was the typical helmet of the hoplites - a bronze helmet, sometimes decorated with a horse-hair crest. The Macedonians used leather armour or armour made of two layers of linen, with metal plates in between the layers. The heavy Corinthian helmet was replaced earlier by a lighter helmet with an exposed face, a simple helmed with a rounded, conical bowl, also known as the Pilos type.

The Celts sometimes fought naked (probably because wounds inflicted on the bare body heal better), but they also used helmets and bronze cuirasses. They invented chainmail armour, the armour made of interlocking metal rings. The Romans adopted chainmail armour, because it was flexible and effective against slashing weapons. In the Middle Ages, it became the basis of knights’ armour in both the West and the East. 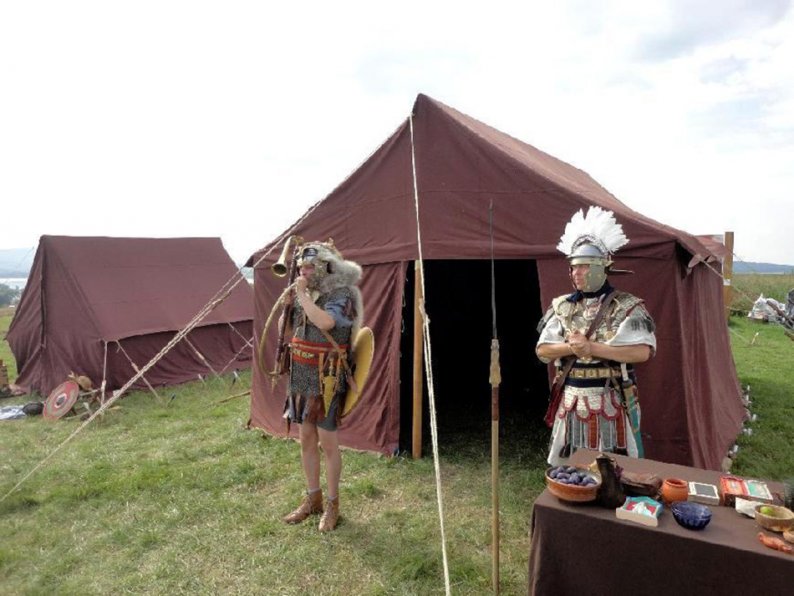 Centurion and trumpeter (wearing a ring armour) of the Roman army of the 1st. - 2nd century AD, recreated by members of the KVH Legio X Gemina
Photo: Edgar Pachta

In addition to the ring armour, the ancient Roman soldiers also used scale cuirasses and lamellar armour, which were typical for the legionaries. Another characteristic feature of the Roman soldier was the helmet of the "Imperial Gallic type", which was available in several variations. 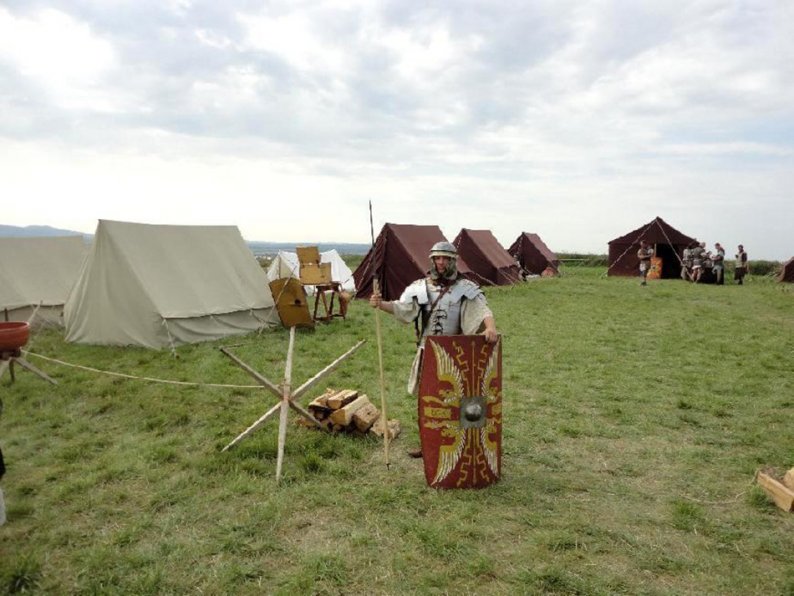 The barbarians who overthrew the West Roman Empire expressed their manhood by fighting naked from the waist up, armour (which they often acquired by looting) being the privilege of their leaders. They conquered and sacked Rome, and their advance was only halted by the massive walls of Constantinople. 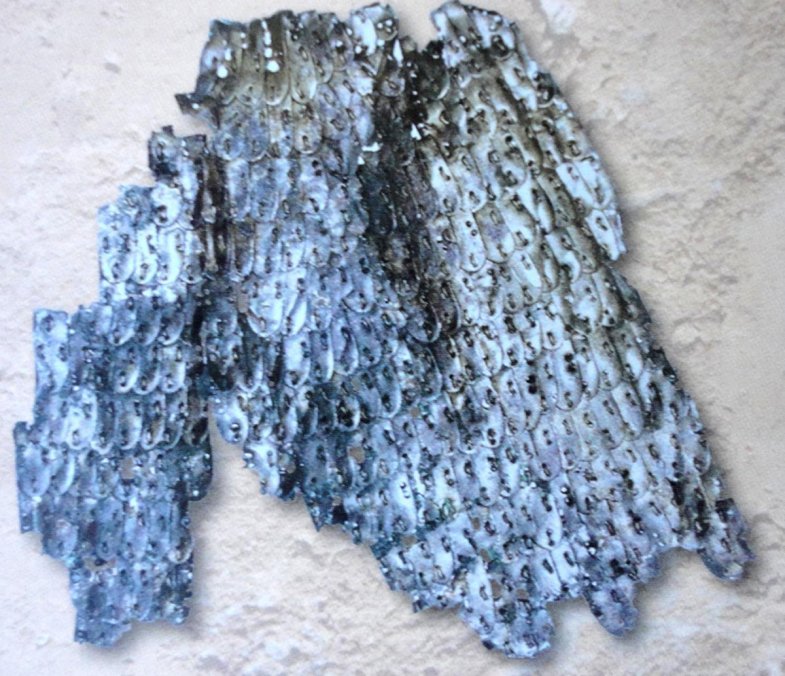 Here, in the eastern part of the Roman empire, plate and scale armour were developed. It protected not only the soldiers (especially heavy cavalry - the horsemen) but also their horses.

The Byzantine heavy cavalry units were based on the "Cataphracts", Parthian cavalry units that inspired many armies and military leaders. Byzantine soldiers used armour made of flexible metal plates that could be tightened together. 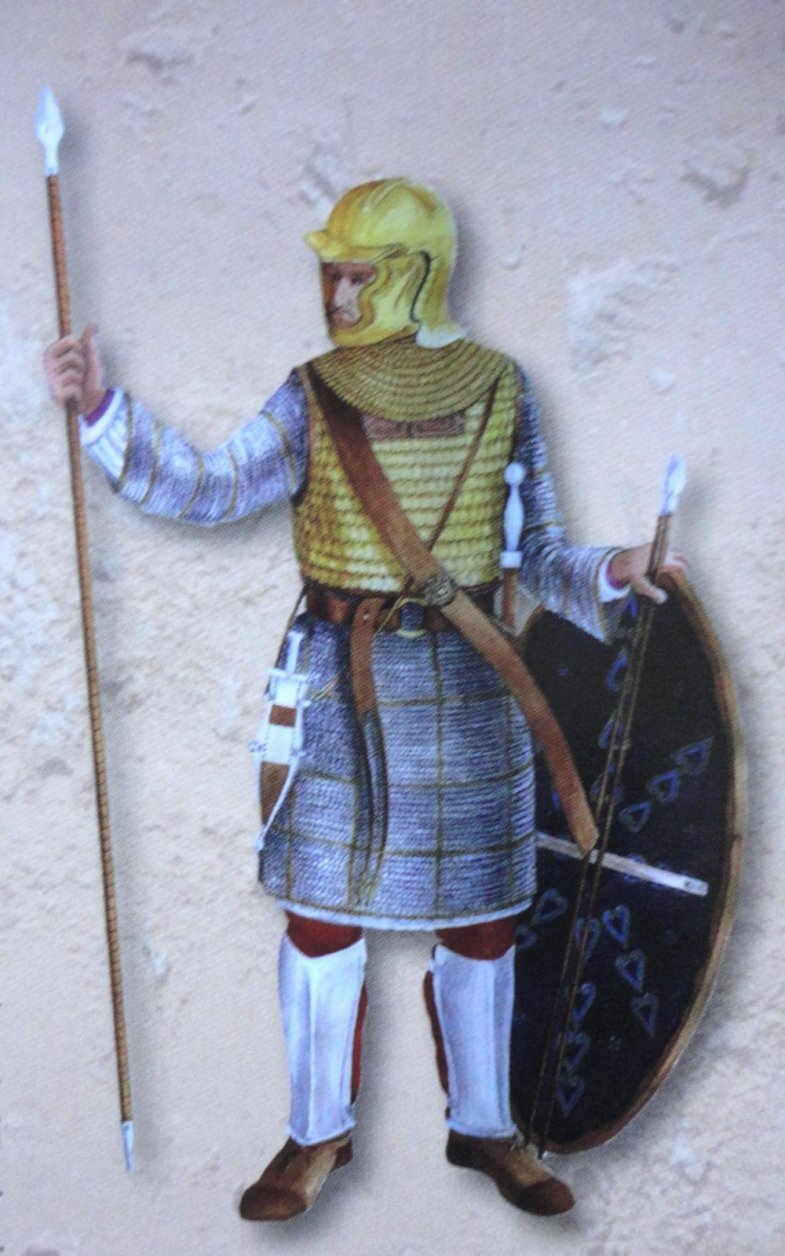 Recreation of the appearance of a Roman legionary with a chainmail shirt and scale armour, 3rd century AD.
Source: Visitors Centre Mušov - Gateway to the Roman Empire (Czech Republic).

In the late 5th century AD, the Frankish Empire was established. The core of their army was cavalry. Frankish cavalry warriors wore very expensive armour in the form of a coat with metal scales or plates. The head protection of the Franks was the Spangenhelm, a helmet with metal strips that formed the framework of the helmet. 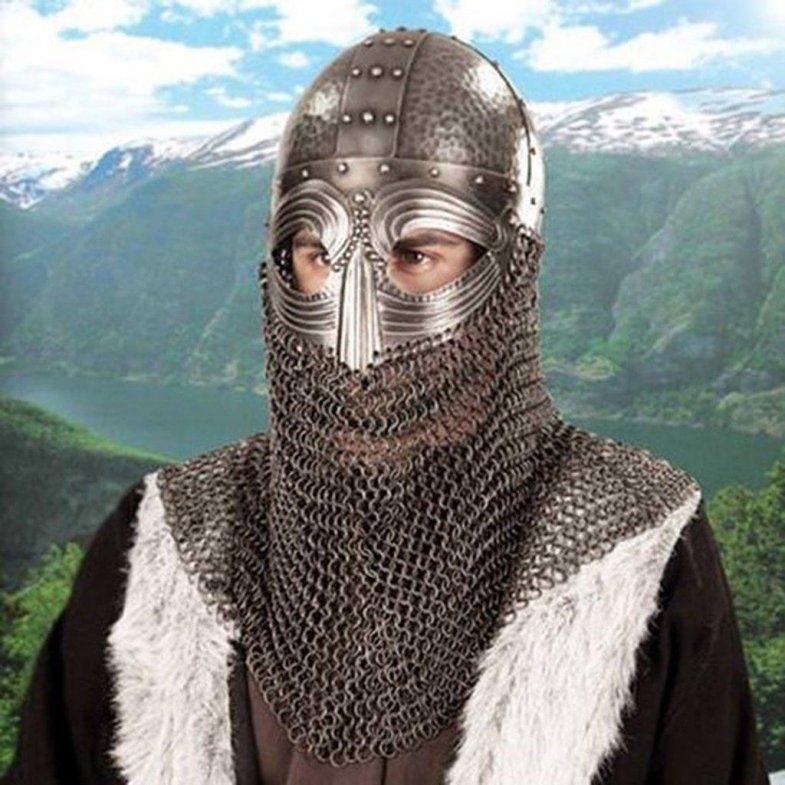 The Vikings used a very high-quality armour made of chainmail rings. Chainmail armour was also popular with the descendants of the Vikings, the Norman soldiers of William the Conqueror at the Battle of Hastings (1066), as well as warriors in the First Crusade (declared in 1095). 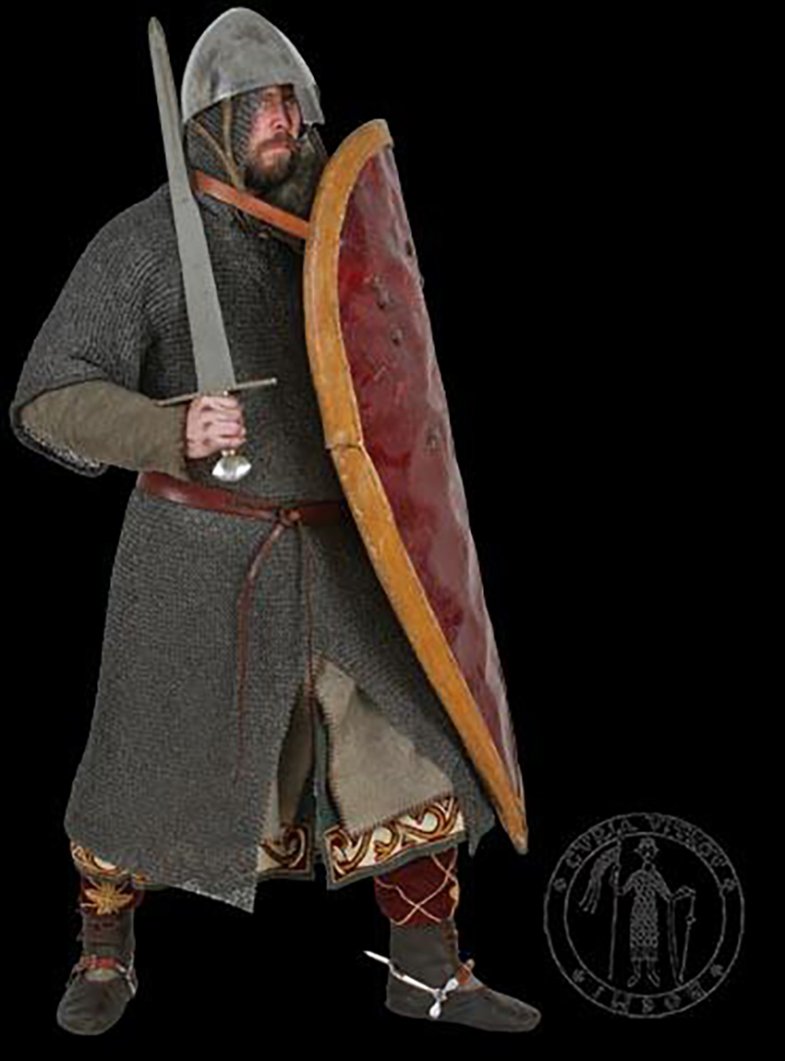 Their long chainmail armour was made of metal rings, but sometimes the armour was made out of metal plates in the shape of squares or scales that overlap like roof tiles. The scales were often linked by leather straps or riveted to fabric base. The spangenhelm was later replaced by a simpler Norman helmet type (the so-called St. Wenceslas helmet) made of a single piece of steel plate.

The chainmail armour was made of small metal rings linked together in a pattern. The diameter of the rings was about 6-8 mm and thickness about 1 mm. One chainmail armour consisted of up to 20,000 rings, depending on the ring size and the type of shirt, and the armour weight ranged from 15 to 20 kg. The helmet weighed about 2 kg

This armour was unusual for the Byzantine soldiers, who adopted metal rings only later. Their warriors gradually started using similar armour like their Muslim counterparts.

The Seljuk Turks, who repeatedly defeated the Byzantine Empire and took control of Jerusalem in the 11th century, wore simple armour made of leather. However, they soon copied the armour types of their enemies and neighbours and started using chainmail armour, helmets with chainmail aventail, steel elbow bracers and kneepads in large numbers.

Knights of the High Middle Ages

On the turn of the 12th and 13th centuries, the use of the chainmail armour was extended to protect the legs. Under the armour, the warriors wore quilted or padded cloth, and tabard was worn over their armour.

In the following decades, various types of arms and leg protection appeared, made of leather at first, and steel later. Gambesons were padded defensive jackets used together with the armour. 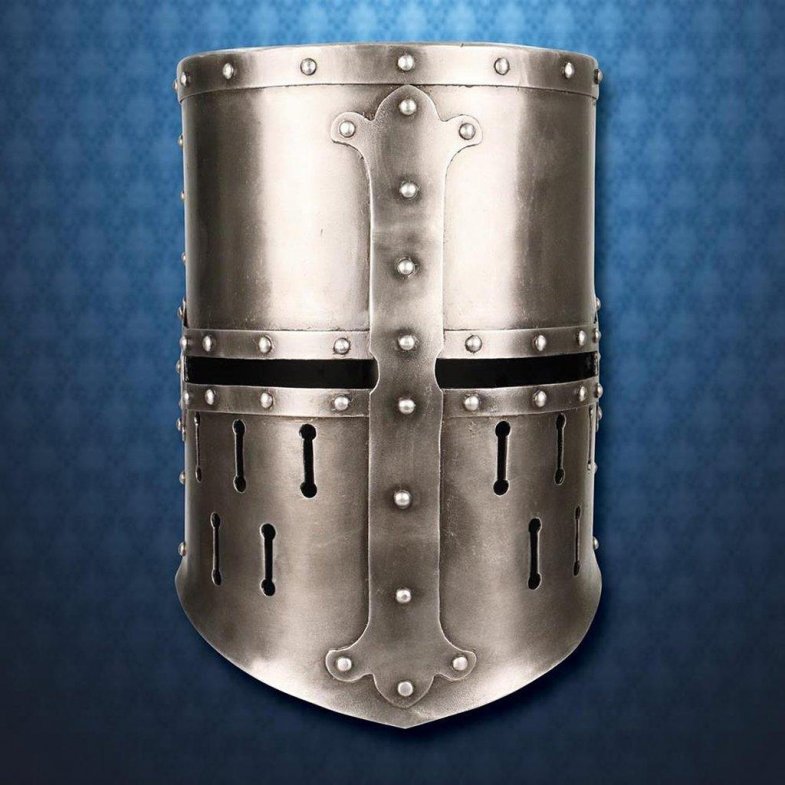 Bucket helmet according to the so-called Maciejowski Bible, 13th century.

The knights and cavalry used heavy helmets called bucket helmets. They were effective enough against the weapons used at the time, especially spears. However, it greatly limited the wearer's vision, and was often replaced by lighter, open helmets (secret helmets). 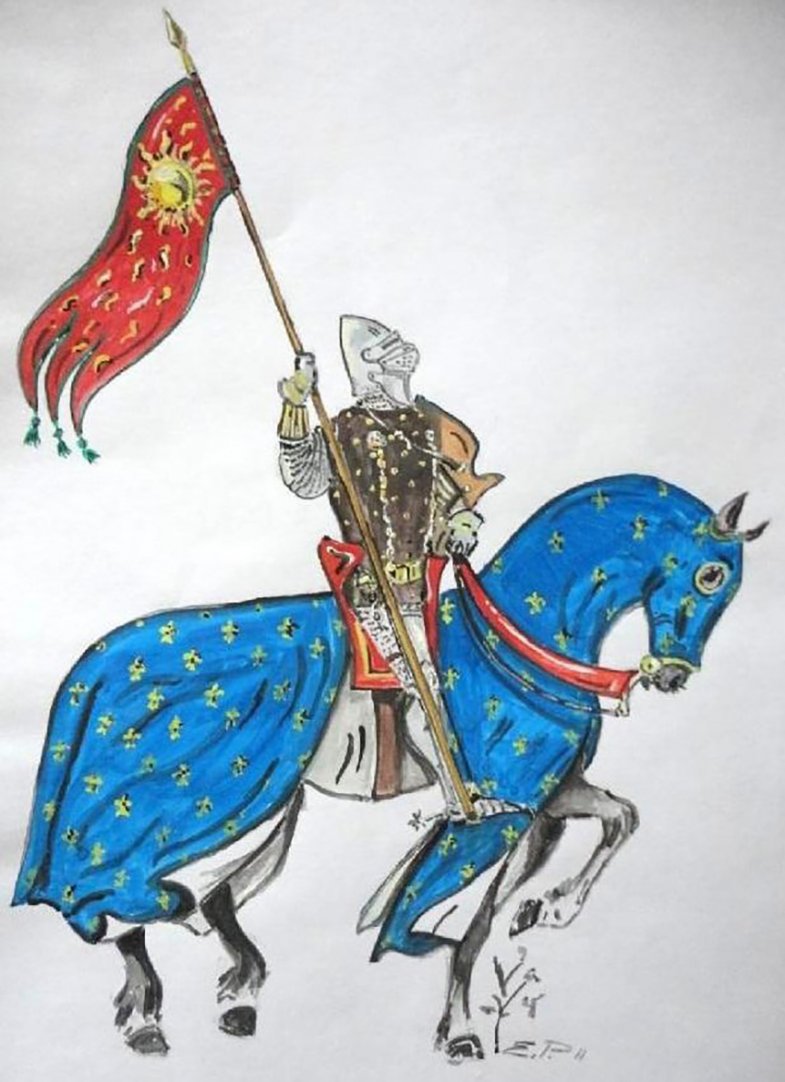 14th century French knight, in chainmail armour with plates and a linen cloth, with a bassinet helmet.
Watercolour: Edgar Pachta

The evolution of plate armour continued in the 14th century. The first layer of armour was a chainmail shirt, over which the coat of plates (the precursor of brigantine armour) was worn. The coat of plates was often reinforced with concealed metal slates of various sizes.

The full plate armour - typical for heavy cavalry of the 15th and 16th centuries - was already in use before the Hussite Wars and became a dominant armour type in the ages to come.